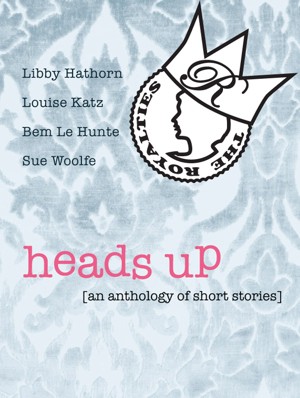 By Bem Le Hunte
Rated 5.00/5 based on 1 reviews
The first e-publication of The Royalties, a collective of Australian writers who have come together to create new models of publishing for writers worldwide. More
The Royalties is a writers' collective founded by Sue Woolfe, Bem Le Hunte, Libby Hathorn and Louise Katz, a group of much-published Australian women novelists who decided to come together to create precedent for innovative new publishing models that will benefit all Australian writers in an international marketplace.
We are not particularly tech-savvy, but we all feel the urgency to participate in rapidly changing publishing structures. With current technology there is a real opportunity for writer-centric models to replace traditional legacy publishing models and promote a true renaissance in literature.
With publishers nervous and bookstores closing, it's become clear to all of us that this is the time for writers to ride the times, take the risk and claim greater rights to their words. And who, we ask, would take control in these formative moments of opportunity, if not the writers themselves?
We are all actively involved in experimenting with our literary work and the way that it is produced, distributed and marketed, and we'd like to share this experiment with other writers. If you're a writer you can join us in this experiment, share in our experience and reach out to a wider community of national and international readers.
Download: epub mobi (Kindle) pdf more Online Reader
rtf lrf pdb txt
Price: Free! USD
Add to Library
Create Widget
Tags: india indigenous television epublishing writer popular fairytale award aboriginal bestselling hans christian anderson colonialism postcolonialism bem le hunte the royalties louise katz libby hathorn sue woolfe the little demon the final christmas the day tv came conversation in the desert nehru autralian outback
About Bem Le Hunte

Bem Le Hunte is half Indian, half English and an Australian by choice. Her first novel, 'The Seduction of Silence,' is the story of five generations of an Indian family, set in the Himalayas and London. Her second novel, 'There, Where the Pepper Grows,' is a story about a group of refugees who escape Nazi persecution in Poland, to arrive in Calcutta during the war.

Both novels have gone on to become international number 1 bestsellers and been published to great critical acclaim. She has just completed a third novel and film script titled 'Father of all Stories,' which will soon be available online and in print. 'Father of all Stories' is accompanied by her doctoral thesis, 'Creativity and Transcendence.'

Wacko! I can hardly believe such great women's writing is available free!

You have subscribed to alerts for Bem Le Hunte.

You have been added to Bem Le Hunte's favorite list.

You can also sign-up to receive email notifications whenever Bem Le Hunte releases a new book.