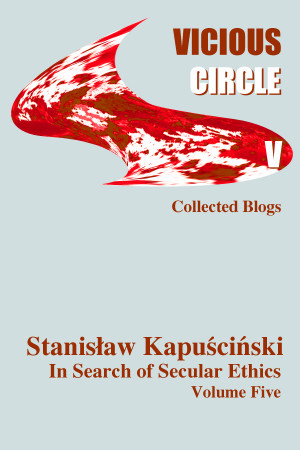 If you want to know how and even why a writer thinks, then this book is for you. The blogs explain what motivated me to write both, my fiction and my non-fiction.
To date, forty times!
Fiction is useful inasmuch it allows one to put into practice one’s philosophical a priori, and illustrate how they might work in the phenomenal reality. In the world, we perceive as real.

On the other hand, non-fiction benefits from blogs, as it forces one to draw certain conclusions (no matter how transient), which otherwise might sound a little too theoretical, perhaps too scholarly, deprived of the spontaneity of ‘eureka!’. Blogs, often no more than notes jotted down on the spur of the moment, are free from such restrictions. They also allow for a dose of humour, which might be inappropriate in a "scholarly dissertation". Hence, I hope you’ll enjoy reading them even as I enjoyed jotting them down. In a way, they are written as much for you as for myself, as they clear my mind from superficialities which clutter my daily life.
Finally, in some blogs, I share with you the opinions of my readers, who, apparently, with equal spontaneity expressed their opinions about some of my books. See if you agree with them.

Architect, sculptor and prolific writer. His special interests cover a broad spectrum of arts, sciences, and philosophy. His fiction and non-fiction attest to his particular passion for the scope and the development of Human Potential. He authored more than thirty books, twenty of them novels, under the pen name Stan I.S. Law.

His life attests that his View of Reality leads to success and happiness. A refugee from Poland at 13, then at 33, having overcome the difficulties of schooling in a foreign language, he left England for Canada in search of new horizons. Later his family scattered, his house burned to the ground, the firm—where he worked for many years—bankrupt… he began his search for the secret of life. Now he is a successful writer, happily married for 25 years, with an assured future.

If you suspect you are more than flesh and bones, read Stan Law. If you want to be sure, read Stanislaw Kapuscinski.

About the Series: Vicious Circle Volumes One - Four

Collections of blogs in Search of Secular Ethics

as inspired by Dalai Lama

At last, #5! I went through the other 4 volumes in as many months, although virtually every blog required of me prolonged contemplation. And now: “Fundamentalism”, “Atheism”, “Masters of the Universe”, “Beyond Human Reality”, “Event Horizon”… and 90, yes, NINETY more!!!
That’s as good as it gets! Thank you!

I am hooked line and sinker. This is the fifth volume of his blogs, and I continue to enjoy them. What a fertile mind he has. Thanks to Stanislaw Kapuscinski, I already see our reality, our world, in a completely new light. So will you. That’s a promise… I wish I could give him more than 5 stars!

If you want to see the world with fresh eyes, read these blogs. The reality Mr. Kapuscinski presents is, with few exceptions, quite new to me. I already read a number of his novels. Now I know what inspired them. Fascinating. Definitely a 5 Star collection.

I’ve only just submitted my review of VC 4. Now, Finally, I can get my teeth into VC 5. I finished volume months ago. I’m glad they keep coming. The consistency of philosophical conceptualization is impressive. Stanislaw Kapuscinski manages to unite the past, the present, and supposedly the future into a fulminating, exciting NOW. Extraordinary! This time I will not delay. After reading the first 3 blogs it's the usual 5 Stars. Thank you.

Vicious Circle 5 came just in time. I finished reading VC 4, usually one blog every two or three days. They need time to digest and adjust my own worldview. As always, the blogs are superb in stirring my grey cells to action. I read most of these mini-essays as they were first published. It is great to revisit old friends! Definitely 5 Stars.

I own Vicious Circles Vols. 1 to 4. Now I got the latest. Rest assured that as long Stanislaw Kapuscinski keeps writing his blogs, I’ll keep collecting them. They are a veritable goldmine of information and, more often than not, originality. Every one of them deserves 5 STARS!!!
Thank you, Mr. K.

You have subscribed to alerts for Stanislaw Kapuscinski.

You have been added to Stanislaw Kapuscinski's favorite list.

You can also sign-up to receive email notifications whenever Stanislaw Kapuscinski releases a new book.