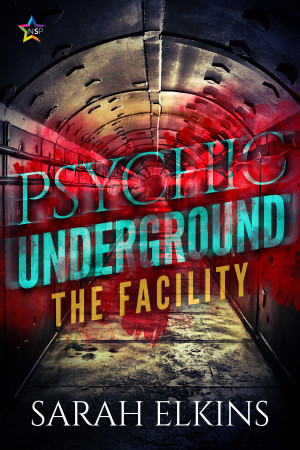 On the way home from visiting friends, Neila gets caught up in a terrorist attack, then wakes up in an underground psychic testing facility. Raised by a doomsday-prepper father, Neila is unusually prepared for the possibility of being whisked away to a secret lab somewhere. When she is faced with the choice of working for the scientists studying psychics at the facility, she takes the job as both an agent and a test subject.

But not everyone in the facility wants to be there.

Sarah Elkins is a 30 year old comic artist and writer who nearly had to give up art entirely due to a form of ossifying tennis elbow that forced her to be unable to use her dominate hand for nearly a year. She spent much of that time writing novels with her left hand as a means to deal with the pain and stress of possibly never drawing again. Thanks to a treatement regimen she is able to draw again albeit not as easily or quickly as she once did.

Sarah enjoys reading science fiction, horror, fantasy, weird stories, comics of every sort, as well as any biographical material about Nikola Tesla she can get her hands on (that doesn’t suggest he was from Venus.) She has worked in the comics industry since 2008 as a flatter (colorist assistant,) penciler, inker, and colorist. She contributed a comic to the massive anthology project Womanthology. Currently she (slowly) produces a webcomic called Magic Remains while writing as much as her body will allow.

You have subscribed to alerts for Sarah Elkins.

You have been added to Sarah Elkins's favorite list.

You can also sign-up to receive email notifications whenever Sarah Elkins releases a new book.