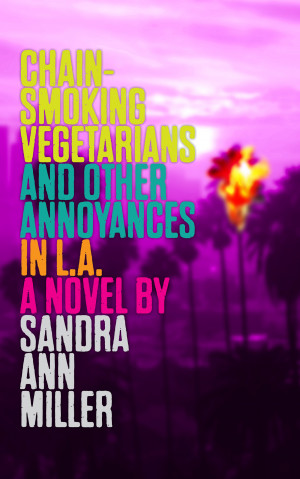 Chain-Smoking Vegetarians and Other Annoyances in L.A.

By Sandra Ann Miller
Can anyone find a happy ending in L.A., even if they work in the movies? El Patterson is trying to produce hers. More
The only thing more annoying than being stuck in traffic, the blinding blitzkrieg of paps, or a chain-smoking vegetarian’s health rant, is having everything you ever wanted in the palm of your hand, and the rug swiftly pulled out from under you. El Patterson’s dreams were on the verge of coming true when a tragic twist of fate took it all away. Facing the official end of her early thirties, with not much to show for it, El has to find her footing, and the guts to go after the life she really wants. A novel by the author of A SASSY LITTLE GUIDE TO GETTING OVER HIM.
Available ebook formats: epub
Price: $5.99 USD
Buy Add to Library Give as a Gift
How gifting works
Create Widget
Tags: romance hollywood chicklit strong female protagonist
About Sandra Ann Miller

Sandra Ann Miller is an active author, sometime screenwriter, intermittent blogger and independent publisher living in Venice, California. A native of Los Angeles and graduate of the California Institute of the Arts, Sandra toiled in the film industry as an assistant...and the stories she could tell if not for the confidentiality agreements. Sandra&#39;s first book, A SASSY LITTLE GUIDE TO GETTING OVER HIM, was released on her own imprint, SAME Ink (2006). The book has something of a cult following and readers mentioning, &quot;I wish I had read this when I was younger,&quot; prompted Sandra to release the Young Adult version in 2017. Her first novel, CHAIN-SMOKING VEGETARIANS AND OTHER ANNOYANCES IN L.A. (2016), is very, very loosely based on her time in Hollywood. Her follow-up, TEMPORARY, was released in early 2018. An avid student of Life and its humorous underbelly, Sandra enjoys yoga, long walks on the beach and tweeting about the wackadoodle nature of our existence.

Reviews of Chain-Smoking Vegetarians and Other Annoyances in L.A. by Sandra Ann Miller

You have subscribed to alerts for Sandra Ann Miller.

You have been added to Sandra Ann Miller's favorite list.

You can also sign-up to receive email notifications whenever Sandra Ann Miller releases a new book.