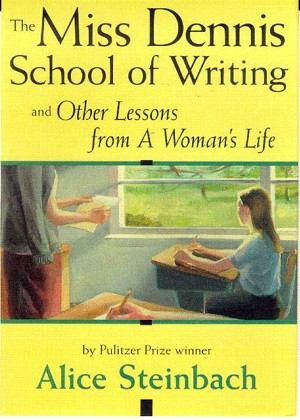 By Alice Steinbach
The first book by Pulitzer Prize-winner Alice Steinbach is an intimate, personal collection of essays, remembrances, and columns that follows in the creative nonfiction tradition of Anna Quindlen and May Sarton. While it recounts the experiences and observations of a divorced, working mother, it expresses hopes and fears universal to all women.

Alice Steinbach, a journalist since 1977, was a reporter, feature writer, and columnist for the Baltimore Sun until 1999. In 1985, she won the Pulitzer Prize for Feature Writing. In the years since, she has won many major awards for both her reporting and her column, which ran from 1989 through 1993. Her work was distributed nationally on the Los Angeles Times-Washington Post wire service. She has been a freelance writer since 1999. She was appointed the 1998-1999 McGraw Professor of Writing at Princeton University and is currently a Woodrow Wilson Visiting Fellow.

Steinbach, along with Anna Quindlen and Molly Ivins, is one of nine women journalists featured in Women on Deadline: A Collection of America's Best. Her work has also appeared in several other books on journalism: The Complete Book of Feature Writing; Writing: Strategies for All Disciplines; and Feature Writing for Newspapers and Magazines. Steinbach did radio commentary for several years, as well as a call-in talk show for WBAL Radio in Baltimore, MD. In 1994, she was a commentator for WJZ-TV in Baltimore.

Her work as a freelance journalist has appeared in many major magazines and newspapers, including Glamour, McCall's, Redbook, Woman's Day, Reader's Digest, The Washington Post, The Philadelphia Inquirer, San Francisco Examiner, Chicago Sun Times, Boston Globe, and other newspapers. In 1991 and 1992, she taught a senior seminar in Creative Nonfiction Writing at Loyola College in Baltimore.

Steinbach lives in her native Baltimore. She has two grown sons.

You have subscribed to alerts for Alice Steinbach.

You have been added to Alice Steinbach's favorite list.

You can also sign-up to receive email notifications whenever Alice Steinbach releases a new book.