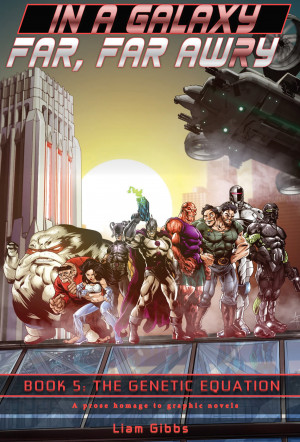 By Liam Gibbs
Master Asinine has a new scheme to destroy his nemesis, Legion: make a dangerous weapon with genetic altering technology.

But when the Bad Guys show up on the Good Guys’ home turf, Station One, with their new genetic weapons, they threaten to turn their enemies into organic soup. Now the Good Guys have to ward off the Bad Guys and keep out of the line of fire.

And it’s not even Monday! More
Technology can now melt your face off.

Disaster strikes at home for Lieutenant Colonel Matross Legion when archenemy Master Asinine attacks with a weapon that unravels your genetic makeup. Suddenly it sucks to have DNA.

Now Legion and his squad must dodge laser beams raining death from above, because the slightest touch turns anybody to genetic soup.

And when Asinine takes Legion hostage, what stands in the way of total galactic domination?

Liam Gibbs knew he was destined to write at age four, when he authored a breathtaking account of a cow who ate grass. The bovine saga failed to catch the public’s eye but earned the budding author parental acclaim. Since those early times, he’s gone on to write the novella Not So Superpowered and humorous articles for various magazines.

A twenty-year veteran of the brutal world of hand-to-hand comic book fandom, Gibbs cut his teenage teeth on titles such as Spider-Man, X-Men, New Warriors, and other Marvel comics.

Gibbs graduated college with a degree in professional writing, which included classes on fiction writing and story structure. He lives on the balmy shores of Ottawa, Canada, where he relaxes by watching staggeringly awful horror and science fiction movies. A health and fitness nut, he shoots lasers from his eyes, uses the word exclusive incorrectly, and once wrestled an exclusive brontosaurus. True story.

About the Series: In a Galaxy Far, Far AwRy

The galaxy's most unhinged lunatic just got his hands on an extinction-level death ray. And he's got an itchy trigger finger.

In a Galaxy Far, Far AwRy is the hilariously bonkers novella series that pokes fun at superhero comics, space operas. It's an even mix of Hitchhiker’s Guide to the Galaxy, Spaceballs, Avengers, and awkward eye contact from across crowded rooms. It mashes all of those into a gigantic wacky ball, takes out the Michael Winslow's cameo (we're as broken up as you are), and spits out a series of stories that will make your face's eyeballs melt out your face's nose holes.

While the series is written in prose form, it draws inspiration from comics like Spider-Man, X-Men, and The Avengers, shows and movies like Seinfeld, Family Guy, Spaceballs, Futurama, and Mystery Science Theater 3000, and miscellany like Tenacious D, Repairman Jack, and Dead Rising.

If you're into any of that stuff, check here often for the best news you've had all day! It's a comic book in prose form but without the baggage of a fifty-year history!

An homage to and spoof of--and not related to--Star Wars in any way.

Also in Series: In a Galaxy Far, Far AwRy

Reviews of The Genetic Equation by Liam Gibbs

You have subscribed to alerts for Liam Gibbs.

You have been added to Liam Gibbs's favorite list.

You can also sign-up to receive email notifications whenever Liam Gibbs releases a new book.