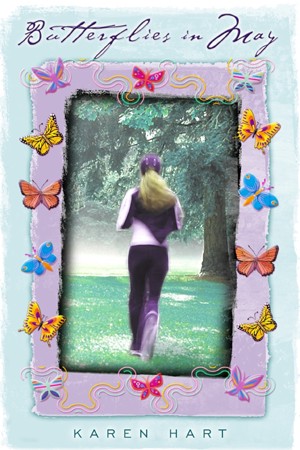 By Karen Hart
Ali Parker, a high school senior, plans to major in journalism at a prestigious college. Her Mr. Perfect boyfriend, Matt Ryan, is a talented artist. Their future possibilities seem endless.

Then the inconceivable happens--Ali becomes pregnant.

Karen Hart began writing as a teenager. She wrote for her high school newspaper and later majored in journalism at Illinois State University, where she also wrote for the campus newspaper, The Daily Vidette.

Since then, Hart has had more than 20 years of experience as a creative and technical writer and editor. She has worked in both corporate communications and public relations, developing a variety of award-winning media and publications, including magazines, newsletters, brochures, and videos. Most recently, she has worked on freelance writing projects, and several magazines, such as Sonoma Family-Life and Enlightened Woman, have published her articles.

The seed of inspiration for Butterflies in May began forming in high school, but later took hold after the birth of her first son. Though she was a teenager a long time ago, she believes that some things—like first love, relationships, heartbreak, and letting go—never change.

She’s currently working on a new novel, The Colour of Love, as well as a book about dreams with noted American psychic, Imara.

Hart resides in Santa Rosa with her husband, Gary, and two sons.

Reviews of Butterflies in May by Karen Hart

You have subscribed to alerts for Karen Hart.

You have been added to Karen Hart's favorite list.

You can also sign-up to receive email notifications whenever Karen Hart releases a new book.