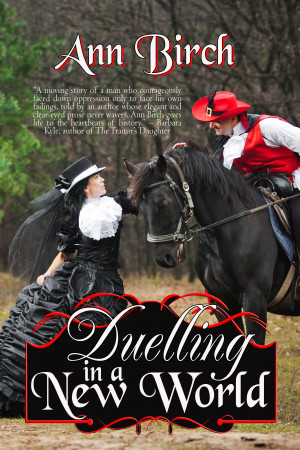 Duelling in a New World

In this new world, John finds pleasure in the friendship of Eliza Russell, sister of Upper Canada’s Receiver-General. They support each other in times of tragedy and despair.

But John makes a grave mistake when he has an affair with Betsy Small, a woman of dubious reputation. Realizing his stupidity, John breaks off the affair and brings Marianne and his family over from England. But Betsy is a vindictive woman who insults his wife, and Betsy’s husband challenges John to a duel. At dawn on January 4, 1800, John takes his pistol and sets out to meet his opponent.

Price: $3.99
$1.60 USD
Buy with coupon Use the code AGB60 at checkout for 60% off during our site-wide promotion!
(Offer good through April 20, 2020 )
Have a better coupon?
Add to cart, then apply your coupon
Add to Library Give as a Gift
How gifting works
Create Widget
Tags: ann birch historical scandals retold in fiction beginning of the underground railroad black history in canada courts lawyers judges and trials in america fighting a duel over an illicit affair formation of law society of upper canada frontier settlements in upper canada lust betrayal adultery and vengeance

Vivid images and believable dialog are evident in this compelling, in depth look into the difficulties a morally strong man has in his fight against injustice in the 18th century. This is a must-read novel.

You have subscribed to alerts for Ann Birch.

You have been added to Ann Birch's favorite list.

You can also sign-up to receive email notifications whenever Ann Birch releases a new book.