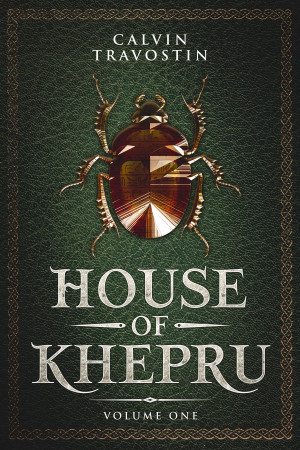 House of Khepru - Volume One

Calvin Travostin is an English Light Novelist whose work is heavily inspired by Eastern fiction (ie. anime, manga, etc).
At the age of 14, Calvin took an interest in Eastern fiction, particularly the anime, manga, and video games of Japan. Surprised at the depth of stories from the Land of the Rising Sun, he became interested in writing in a similar style, while still retaining his own originality.
Calvin is currently writing the House of Khepru light novel series, a story influenced by various tropes of anime and manga, while still appealing to normal Western readers.
When not writing, Calvin enjoys working with computers, or catching up on the newest anime season. He aims to become a full-time author, and hopes his writing not only entertains, but inspires.

About the Series: House of Khepru

College is different for everyone, but for Cayne Hathor, it just got really crazy!

He's just moved into his new dorm, and looks forward to attending college alongside Adam Gebter, his best friend, as well as move on from the death of his first love, Sona Vazes.

But, after meeting a strange girl named Angela, Cayne is pulled into a supernatural war against the Ahkasans, ethereal demons that attack people and drain them of their life force.

To make things worse, a mysterious stalker keeps showing up near Cayne, and killing other Ahkasans that get to close.

Can Cayne learn to control his new powers, and oncover the mystery behind his stalker?

House of Khepru is a highly enticing book that caught me with it's Ahkasan claws and just wouldn't let go till the very end. It was an enjoyable book that left me wondering how Cayne will further his experiences with his newly found college life and I absolutely can't wait for Volume Two. Overall, the books was a nice, light read that engulfs the reader into a new found magic.

You have subscribed to alerts for Calvin Travostin.

You have been added to Calvin Travostin's favorite list.

You can also sign-up to receive email notifications whenever Calvin Travostin releases a new book.