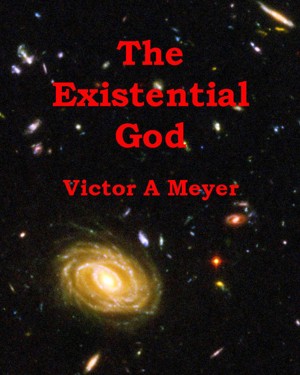 By Victor Meyer
Despite organized religions, we live in an age where we are free to develop our own unique understandings of God. An "Existential God" is our personal beliefs upon which we live our lives. This book presents a new paradigm of God consistent with modern science. It is for atheists, agnostics, and open minded individuals who ask how God can still exist in the face of modern scientific discoveries. More
An "Existential God" follows three themes similar to modern existentialism. We are each unique individuals. We are free to develop our own beliefs about God. And, we live our lives according to our beliefs.

After introducing the concept of the Existential God, the author presents his personal Existential God. This new paradigm of God is the result of a life-long search by the author to reconcile the dogmas of his Catholic faith with what he has been taught about modern science.

Many authors, who try to bridge the gap between religion and science, start with a blind acceptance of Christian doctrine, and then show how pieces of science support these traditional beliefs. In this book, the author uses the opposite approach. Rather than blind acceptance of traditional religious beliefs, the author accepts, as true, the physical laws of our universe. From that basis, the author looks for an understanding of God in what we know to be true, but which the physical laws of science cannot explain.

Philosophers have argued whether human consciousness can be explained by the laws of physics, or whether it represents a reality separate from the physical universe. Modern science still cannot explain what consciousness is. The author builds his new paradigm about God on the thesis that the brain is really an interface mechanism between our physical bodies and a mental world that is God. Our consciousness represents our personal oneness with God while we live our lives.

Building on this view of God, the author expands on how it applies to the concept of “self” and presents his interpretations of heaven and hell. The author also presents his views on such diverse topics as natural law, miracles, evolution, sex, and marriage. The book concludes with a discussion of how the author can still call himself a Catholic even though his views do not follow the traditional interpretation of Christian beliefs.

This book is not for those who unquestionably accept Jesus Christ as their Lord and Savior. Similarly, it is not for those who profess to Allah, and Mohammed as the messenger of God. Nor is it for devout followers of Hinduism, Buddhism, or any other “ism”. For these people, their religion is their personal Existential God. Rather, this book presents a new view of God that is consistent with what we know about our universe. It is for atheists, agnostics, and open minded individuals who ask how God can still exist in the face of modern scientific discoveries.
Available ebook formats: epub mobi pdf rtf lrf pdb txt html
First 20% Sample: epub mobi (Kindle) lrf more Online Reader
pdb
Price: $5.99 USD
Buy Add to Library Give as a Gift
How gifting works
Create Widget
Tags: spirituality god consciousness religion faith science evolution intelligent design miracles self eternity life after death natural law human mind existential god mental world personal relationship with god
About Victor Meyer

Victor A Meyer is the founder of ExistentialGod.org, a website dedicated to understanding God in a scientific world. He was born a cradle Catholic in Monroe, Michigan, and was educated in the local Catholic school system. His degrees include a B.S. in Mathematics, an M.A. in Mathematics, and an M.A. in Computer Science, all from the University of Detroit, a Jesuit institution.

Following his graduation from college, Victor served as a Captain in the United States Air Force at Fort Leavenworth, Kansas. Upon receiving his Honorable Discharge, he joined the faculty of Saint Mary College in Leavenworth and eventually served as the Chairman of the Department of Mathematics and Computer Science.

It was during his twelve year tenure at Saint Mary College that Victor met and married his wife Georgette. In addition to raising their children, they were active in the Charismatic movement as well as the music ministry at their local Catholic church where Victor served as the Folk Group Director.

In order to better afford a Catholic education for their children, Victor and Georgette moved to Fort Worth, Texas, where Victor went to work for First Command Financial Services as an IT Specialist, and later as a Business Intelligence Analyst. It was during these years that his wife, Georgette, battled breast cancer and eventually died leaving Victor to finish raising their four children.

Victor continues to be active in the music ministry at his local Catholic church. As his children reached adulthood, Victor became increasingly aware of a calling by God to spread to the rest of the world his new paradigm for God in this Scientific Age. The writing of "The Existential God" and the founding of ExistentialGod.org were the first steps toward answering this calling.

Reviews of The Existential God by Victor Meyer

You have subscribed to Smashwords Alerts new release notifications for Victor Meyer.

You have been added to Victor Meyer's favorite list.

You can also sign-up to receive email notifications whenever Victor Meyer releases a new book.