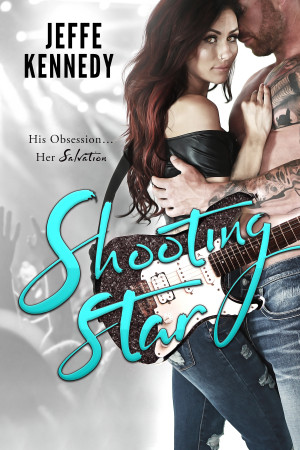 The critics call her human lip gloss, all style and no substance. To Joe Ivanchan, Ava is the exact blend of reality and fantasy that he can tolerate, the closest he’s willing to get to giving his heart after the injury and breakdown that got him out of the service.

But Ava is real. She’s a flesh and blood woman with a publicity machine and an album deadline, along with a whole team of handlers paid to shellac a pristine sheen over a damaged, desperate soul. A woman with fears, with secrets, with desires.

When Joe finds himself in an interview to join her security team as her driver, his instinct is to get away. But the woman behind Ava’s carefully focus-grouped image is even harder to walk away from. The angry needs tormenting her speak to something within Joe. Something empathetic, protective—and primal...

Besides, even a falling star can light up the darkest night.

Jeffe Kennedy is an award-winning author whose works include novels, non-fiction, poetry, and short fiction. She has been a Ucross Foundation Fellow, received the Wyoming Arts Council Fellowship for Poetry, and was awarded a Frank Nelson Doubleday Memorial Award.

Her award-winning fantasy romance trilogy The Twelve Kingdoms hit the shelves starting in May 2014. Book 1, The Mark of the Tala, received a starred Library Journal review and was nominated for the RT Book of the Year while the sequel, The Tears of the Rose received a Top Pick Gold and was nominated for the RT Reviewers’ Choice Best Fantasy Romance of 2014. The third book, The Talon of the Hawk, won the RT Reviewers’ Choice Best Fantasy Romance of 2015. Two more books followed in this world, beginning the spin-off series The Uncharted Realms. Book one in that series, The Pages of the Mind, has also been nominated for the RT Reviewer’s Choice Best Fantasy Romance of 2016 and won RWA’s 2017 RITA® Award. The second book, The Edge of the Blade, released December 27, 2016, and is a PRISM finalist, along with The Pages of the Mind. The next in the series, The Shift of the Tide, will be out in August, 2017. A high fantasy trilogy taking place in The Twelve Kingdoms world is forthcoming from Rebel Base books in 2018.

In 2019, St. Martins Press will release the first book, The Orchid Throne, in a new fantasy romance series, The Forgotten Empires.

Jeffe can be found online at her website: JeffeKennedy.com, every Sunday at the popular SFF Seven blog, on Facebook, on Goodreads and pretty much constantly on Twitter @jeffekennedy. She is represented by Sarah Younger of Nancy Yost Literary Agency.