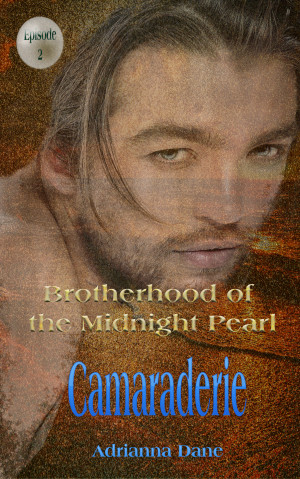 Alonzo has passed his initiation, but now he and the others await their guide. These men discover more about each other than they ever expected, and Alonzo finds depths to his sexy comrade, David, that he never anticipated... More
The ancient myths of the Brotherhood of the Midnight Pearl tell of an island formed from the depths of the ocean, in the midst of a sea of mystical, sapphire beauty. It is an island paradise built on love and devotion to a common belief, a society made up entirely of handsome and desirable men. And Alonzo Smith is on a journey to discover his place among them.

In this story, Alonzo has passed his initiation, but now he and the other initiates await their guide who will take them across the Titan Mountains and into the city. These men discover more about themselves, and each other, than they ever expected. In particular, Alonzo finds that there are depths to his sexy comrade, David, that he never anticipated...
Available ebook formats: epub mobi pdf lrf pdb html
First 20% Sample: epub mobi (Kindle) lrf more Online Reader
pdb
Price: $0.99 USD
Buy Add to Library Give as a Gift
How gifting works
Create Widget
Tags: erotica gay fantasy submission mm series
About Adrianna Dane

Adrianna Dane has been putting pen to paper since the age of ten. She currently resides in the state of Washington. She has a great fondness for using a fountain pen when writing her first drafts. Hobby interests are varied, including photography and traveling.

The first defining love story Adrianna read back in junior high school was "Wuthering Heights" by Emily Bronte, and that set her on the road to her long-standing love affair with books of all genres. Her inspiration in writing often can be found by listening to song lyrics, from hard rock to classical, and reading poetry by such poets as Elizabeth Barrett Browning, Edgar Allen Poe, and Ranier Maria Rilke. But finding inspiration for her stories truly has no boundaries for Adrianna.

In 2006, her dark fantasy GLBT story, Body Parts, won its category in the Dream Realm Awards. Adrianna has written more than 100 stories, short, novella, and novel length, delving into many facets of the human condition - contemporary, futuristic, and fantasy, and all the flavors therein and in between. In other words, wherever the story and the characters, as well as their intricate stories, take her imagination, then her pen and/or computer keyboard, are sure to follow.

You have subscribed to alerts for Adrianna Dane.

You have been added to Adrianna Dane's favorite list.

You can also sign-up to receive email notifications whenever Adrianna Dane releases a new book.