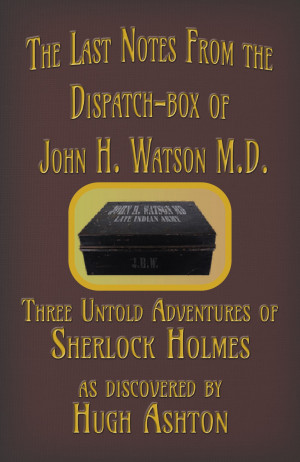 The Last Notes From the Dispatch-box of John H. Watson M.D.

By Hugh Ashton
Found at the bottom of a dispatch box once belonging to John H Watson, MD, are notes of cases which, until now, had never been read. Notes that reveal the details of The Russian Bear, The Hand of Glory and the Missing Spoons. More
The first , “The Russian Bear”, involves the British Government, as represented by Mycroft Holmes. The circumstances surrounding it are mentioned in “The Disappearance of Lady Frances Carfax”, where Holmes mentions to Watson that it would be impossible for him to leave London while “old Abrahams” is in such danger. We are not told any more about Abrahams in the Canon, but he may be identified as Sir David Abrahams, who makes his appearance in “The Enfield Rope”.
In it, we see Holmes’ varied interests, including Kaballah, and some knowledge of the anarchist and revolutionary movements in Russia at the end of the 19th century (the last no doubt at least as the result of his work for Mycroft).
There can be little doubt in my mind that Watson witheld publication of this adventure on account of its political sensitivity.

The second adventure recorded here, “The Hand of Glory”, is a purely domestic adventure, taking place as it does in a small unnamed Warwickshire market town, which it is impossible to identify from the sketchy description here.
Holmes’ knowledge of the esoteric superstitions of the past stands him in good stead here, and leads him to a satisfactory elimination of a criminal conspiracy, set up and masterminded for reasons of personal revenge.
The grisly elements in this story are beyond anything described elsewhere by Watson, surpassing even “The Cardboard Box” and “Black Peter” in their gruesome nature. It seems to me that this would form a reason for this adventure to remain unpublished by Watson.

Lastly, we turn to the “Disappearing Spoon” ; a light-hearted look at a very minor incident in which Holmes renders assistance to a former schoolfellow. Disappointingly, though, we are not informed which school he attended (my personal belief is that Holmes was educated at Stonyhurst College, but there is no way of verifying or disproving this from the material available here).

Hugh Ashton was born in the UK in 1956, and after graduation from university worked in the technology industry around Cambridge (the first personal computer he used was Sir Clive Sinclair’s personal TRS-80) until 1988, when a long-standing interest in the country took him to Japan.
There he worked for a Japanese company producing documentation for electronic instruments and high-end professional audio equipment, helped to set up the infrastructure for Japan’s first public Internet service provider, worked for major international finance houses, and worked on various writing projects, including interviewing figures in the business and scientific fields, and creating advertorial reports for Japanese corporations to be reprinted in international business magazines.
Along the way, he met and married Yoshiko, and also gained certificates in tea ceremony and iaidō (the art of drawing a sword quickly).
In 2008, he wrote and self-published his first published novel, Beneath Gray Skies, an alternative history in which the American Civil War was never fought, and the independent Confederacy forms an alliance with the German National Socialist party. This was followed by At the Sharpe End, a techno-financial-thriller set in Japan at the time of the Lehman’s crash, and Red Wheels Turning, which re-introduced Brian Finch-Malloy, the hero of Beneath Gray Skies, referred to by one reviewer as “a 1920s James Bond”.
In 2012, Inknbeans Press of California published his first collection of Sherlock Holmes adventures, Tales from the Deed Box of John H. Watson M.D., which was swiftly followed by many other volumes of Holmes’ adventures, hailed by Sherlockians round the world as being true to the style and the spirit of the originals by Sir Arthur Conan Doyle. Inknbeans also published Tales of Old Japanese and other books by Ashton, including the Sherlock Ferret series of detective adventures for children. He and Yoshiko returned to the UK in 2016 for family reasons, where they now live in the Midlands cathedral city of Lichfield.
In December 2017, Inknbeans Press ceased to be, following the sudden death of the proprietor, chief editor and leading light. Since that time, Ashton has reclaimed the copyright of his work, and has republished it in ebook and paper editions, along with the work of several other former Inknbeans authors.
He continues to write Sherlock Holmes stories, as well as various other fiction and non-fiction projects, including documentation for forensic software, and editing and layout work on a freelance basis, in between studying for an MSc in forensic psychological studies with the Open University.

About the Series: The Dispatch-box 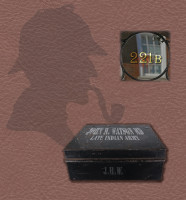 The second of Doctor John H. Watson's tin boxes, which he deposited in the vaults of Cox & Co. in Charing-cross.

Also in Series: The Dispatch-box

You have subscribed to alerts for Hugh Ashton.

You have been added to Hugh Ashton's favorite list.

You can also sign-up to receive email notifications whenever Hugh Ashton releases a new book.