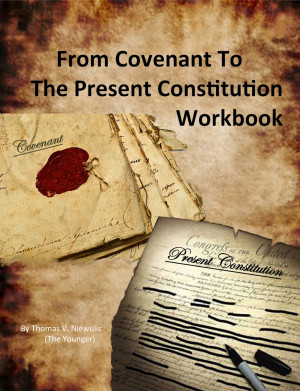 From Covenant To The Present Constitution

By Tom Niewulis
Why does Congress and government function as it does? Because it can! From Covenant To The Present Constitution is the deep referenced dive into the presentation of The Tale of Two Constitutions - The Anti-federalists Got IT Right. There are principles for good governance that are foundational. How should governance work? Read what it 'WAS" and now "IS' and how to restore Constitutionalism. More
The Foundational words of the Constitution have not changed but the present implementation is NOT what the Founders Intended. We tell the elected and the bureaucrats to ‘Stand on the Constitution’! Well, they are doing exactly that! In fact - you telling them to do so gives them permission to fully act according to every aspect of what is presently allowed under the Constitution ‘As It Is’.

This ‘Workbook’ is the culmination of ten years of presenting the lecture that discusses ‘Two Constitutions’ that really begins with the understanding of ‘Covenant’.

Our Founders and Framers of our form of governance understood history back into the ancients such that the relationship of the governing to the governed is established with covenant fully understood. No different then the Kings of England breaking Covenantal Charters with the Colonies; how is it that those elected to office, in the courts and in the bureaucracies have broken Covenantal Constitutionalism with the Citizens and State in the Republic of these United States?

This highly documented ‘Workbook’ takes you through the questions and answers as to why the elected and appointed so freely act contrary to what many believe is the American DNA of Constitutionalism. This is the detailed referenced compliment to the presentation lecture that moves at a fast pace through Founder’s Original Intent, the corruption of that intent, the present confusion of the document called ‘The Constitution’ and how it is actually being used to govern the nation.

Lastly are recommendations as to what we as individuals and as the body politic can and should do to return to that which our Founders and Framers envisioned for a Free and Prosperous people in this Republic of these United States.

Tom Niewulis is first and foremost a simple citizen circa 1804. He is also the President and CEO of NCDCS, Inc. Tom has over 25 years in business and organizational analysis, strategic planning, financial and organizational management. Tom has delivered business studies, technical studies and made presentations at industry conferences in the United States and Europe. He has been a member of the technical advisory boards for emerging companies as well as the Fortune 500. He is published internationally. He is a member of the National Association of Corporate Directors and The World Intellectual Property Organization.

Tom has been active in the political arena after serving in the military. While in the military he studied communism, surreptitious and indigenous actions and intervention. He has studied the founding of America since the mid 70’s with an emphasis on its cultural challenges as well as why and how the Constitution was developed. He has studied independently the Federalist and Anti-Federalist Papers, Joseph Stories Commentaries, Blackstone, Locke, De Tocqueville, Madison’s Notes and the various states Ratifying Conventions; as well as original source writings of Samuel Adams and Sam’s contemporaries. In conjunction, these studies include the Reformation with an emphasis on the Scottish Reformation, Lex Rex, the Puritans and Covenant, the First Great Awakening and the Sermons the Founders heard preached.

Tom was the Chair of Constitutional Economics at the Thomas Jefferson Center for Constitutional Studies founded by Cleon Skousen and Glenn Kimber. He was in leadership and on the board of directors for We The People Washington. He is a political blogger and writer. He has also spoken on Agenda 21. He is the Author of “Not ALL Conservatives Are Constitutionalists” with other books in the works: “Liberty to Economy” and “Rethinking Property Rights Today.”

Tom encourages the re-education of the citizenry through seminars on the Constitution and other presentations. He is a Constitutional thinker from the Anti-Federalist perspective desiring to return to the Founders / Framers Constitutional Original Intent. Tom has additionally studied the life of Samuel Adams to the extent that he appears in character as this alter ego.

Tom&#39;s educational background is in physics, behavioral science and Masters work in organization development and design as well as telecommunication management.

You have subscribed to alerts for Tom Niewulis.

You have been added to Tom Niewulis's favorite list.

You can also sign-up to receive email notifications whenever Tom Niewulis releases a new book.