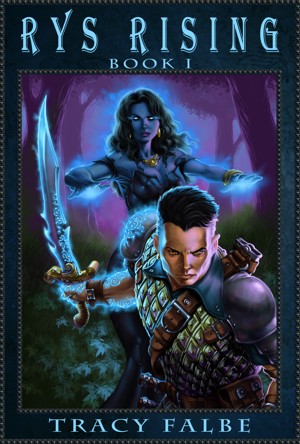 A young warrior ruined and near death is saved by Onja a mysterious rys female. Forsaking all that he was, he will take the name Amar and serve his new magical mistress. A lord among outlaws he will become, feared by kings and called the dro-shalum or curse demon by the common folk.

Indulge yourself and read this sumptuous epic told from many angles. More
Serving Onja makes it right.

In this passionate epic told from many angles, the young outlaw Amar becomes a dreaded warlord, the terror of kings. His ambitions blind him to the trivial diversions of mere female company until he must block a treaty marriage between two powerful tribes. Confronted by the desperate Princess Demeda, he feels temptation again, but the longings of his ruined heart cannot overcome his pure love for Onja. She is a mysterious outcast from the magical rys race that is oppressed by the tabre of Nufal. Onja has commanded Amar to dominate the humans of Gyhwen while she plots to overthrow her tabre masters. To support her cause, she aims to seduce Dacian, a prodigy among rys whose powers have been hobbled by his loyalty to the ruling tabre order. Will he endure more dark abuses for the sake of peace or reach out to Onja?

I have been hooked on fantasy and science fiction since preschool when I watched Star Trek the Original Series with my family on TV. Then came Star Wars at the theater when I was 5, and a few years later, I discovered the joys of reading fantasy with the Hobbit and the Lord of the Rings. I quickly moved up to stronger stuff like Conan, and I currently like The Song of Ice and Fire.

The elements I like most about the genres are the high stakes (save the world, overthrow the empire, etc.), the diversity of characters, and how magic or extraordinary technology allows plots to expand in interesting ways. The ability of fantasy and sci fi to include analysis and criticisms of social conditions like religion and politics is especially fascinating as well. When this is done in conventional humdrum fiction, people and readers descend into arguments about whether an opinion is valid or the historical information is accurate instead of assessing the concepts themselves. These interfering issues are not present in the purely metaphorical works that occur sometimes in fantasy and science fiction.

I have written a four-novel epic fantasy series entitled The Rys Chronicles. The individual novels of the series are: Union of Renegades, The Goddess Queen, Judgment Rising, and The Borderlands of Power. I produce my novels in paperback and ebooks, and readers all over the world have been kind enough to allow me to entertain them.

Currently I am in the midst of writing another fantasy series. I expect this one to be 4 novels as well, and, as of February 2009, I am closing in on completing Book II. This series is still untitled and I won't be publishing it until it is complete. This process allows me to fine tune everything throughout the novels.

When I'm not writing, my other passions include cooking, growing food, reducing my consumption of fossil fuels, and reading.