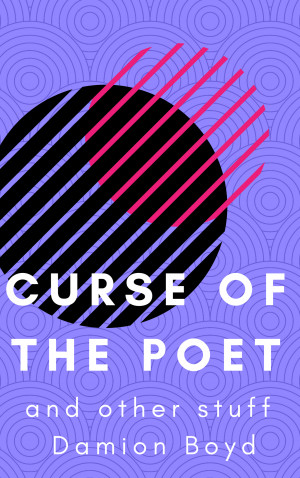 Curse Of The Poet And Other Stuff

By Damion Boyd
Rated 5.00/5 based on 1 reviews
The third collection of poetry from international author and poet Damion Boyd. Some of these are almost too heavy and many are downright playful. All have that brevity and depth of insight that is a hallmark of his work. This collection ends with book excerpts from his most popular book "About the end of the World" and his lifetime achievement "Primal Ethics". More
If you don't like this poem....you should pass this collection by.

When DeLorean was arrested
I spent the weekend at the home
of a drug dealer: snorting coke, watching the news
and waiting for the door to be kicked in.
On Sunday, something kept knocking against my hollow soul
the way rocks clang off an empty, metal barrel.
Echoing, I drank more beer.
Later, kneeling before a shifting toilet,
I asked Almighty God to let me live just that day.
My face burned and the veins of my neck ached from the strain
Covered with sweat, I was afraid
but could soon forget that God had listened.

Sometimes then, I would see myself from across the room
and wonder if anyone else
thought I looked like a talking dead body
waiting for God to kick the door in
Download: epub mobi (Kindle) pdf more Online Reader
lrf pdb txt
Price: Free! USD
Add to Library
Create Widget
Tags: poetry essay
About Damion Boyd

Boyd has experienced many unusual things. He grew up in a very large and turbulent family. His mom went blind when he was a child. His father was a battered war veteran who worked as a drill instructor in the Marines--running his family like a boot camp.at times. Having learned to cook for his family, Boyd grew up to manage restaurants. But, then went down a path of drug abuse and addiction. Finally, after turning to God for help, he overcame drug addiction and joined a Catholic monastery for 5 years. Later he left the Benedictines and got a job in a shipyard. He married a political refugee from Mexico City, is raising 3 children.
His most popular books are Primal Ethics, The Curse of the Poet and Popular Misreads of Reality.
He can be reached for comment at ferd453@aol.com.

loved the poetry all the way

You have subscribed to alerts for Damion Boyd.

You have been added to Damion Boyd's favorite list.

You can also sign-up to receive email notifications whenever Damion Boyd releases a new book.