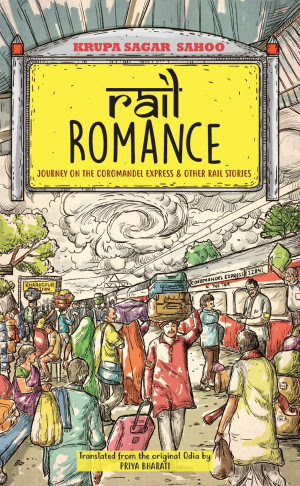 The second part is a collection of fascinating threads interwoven into a beguiling narrative:

• Why did the daughter of a Station Master vanish from the colony one fine morning
• ?How a Station Master is tormented by a cobra's presence in his quarters.
• Why a tea stall contractor invites the wrath of a Commercial Officer.
• What happened to the coolie apprehended during a security drive?
• Does the rodent elimination drive end in success or disaster?
• Does the future son-in law of G.M Sahib get special treatment from the Railway staff?
• How an old lady and a newly married girl display similar emotions when confronted by their spouses.
• What happened to the family stuck in traffic congestion; do they make their train?

Krupa Sagar Sahoo is a Senior Ex-Railway Officer (Retd. IRTS Officer), who served the Indian Railways for thirty-four years from 1978 to 2012. During this tenure he was posted in various zones of Indian Railways and had the good fortune to draw inspiration from his experiences with people at work and life in general. More than fifty of his short stories have Indian Railways as the theme. His style of subtle humour has earned him a niche in Odia literature. Nature in all its manifestations, animals, birds, and the common man are also some of the recurring themes in his writings. Today, he is a leading name in Odia literature, with thirteen short story collections and six novels to his credit. Many of his stories have been translated into English and other major Indian languages and have been appreciated by his readers.

Shri Sahoo was a recipient of Odisha Sahitya Academy Award 2009 for his original novel Shesha Sarat, which has been translated to English under the title Chilika: A Love Story.

You have subscribed to alerts for Krupa Sagar Sahoo.

You have been added to Krupa Sagar Sahoo's favorite list.

You can also sign-up to receive email notifications whenever Krupa Sagar Sahoo releases a new book.