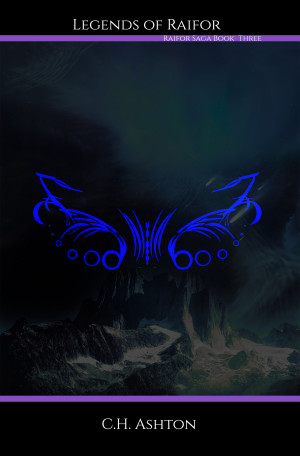 By C.H. Ashton
Legends of Raifor is the action packed third volume in the ongoing Raifor saga. It sees the end of the short-lived peace of Sheicei's Empire as the Echooma, a forgotten race imprisoned on a remote planet, invade Raifor to retake what they believe to be theirs. More
The Empire is in the hands of the enemy. Sheicei has won control of Raifor following the disaster at Jeran. The Empress is presumed dead, as are most of her most loyal followers. Hope lies in the hands of the few people who have remained onboard the Halcyon.

Meanwhile, on Erelia, Aosen Yenra and his Wife Constance work their hardest to establish a new home for themselves, their family and their followers. Peace is not easily attained when you are marked as a traitor and criminal by an entire galaxy, and the Erelian Exiles must fight off attacks on a near daily basis to keep the peace.

Bach-Ti’s imprisonment on Polmyon is nearing its end. With freedom in sight a new enemy bares its fangs and unleashes an unprecedented attack on not only the order of the mountain, but all of the aetheric orders. The Echooma have returned to the galaxy to claim what was stolen from them.

Without the Empress’ control, Lanoel was condemned to spend her time in stasis, but Halcyon will not let her sit idle. There are things she must learn and see if her destiny is not to atrophy and fade away.

Sheicei’s peace was won by his new Saviet allies, but he begins to question their loyalty when he realizes that the weapon he used to disable Kyreia could just as easily be used against him. What are the Saviet planning? Can anyone stand against the might of the Echooma? Will peace ever come to Raifor? Find out as Legends come to life and reshape the galaxy in their image.
Available ebook formats: epub mobi pdf lrf pdb txt html
First 10% Sample: epub mobi (Kindle) lrf more Online Reader
pdb
Price: $4.99 USD
Buy Add to Library Give as a Gift
How gifting works
Create Widget
Tags: magic mecha scifantasy anime inspired
About C.H. Ashton

Reviews of Legends of Raifor by C.H. Ashton