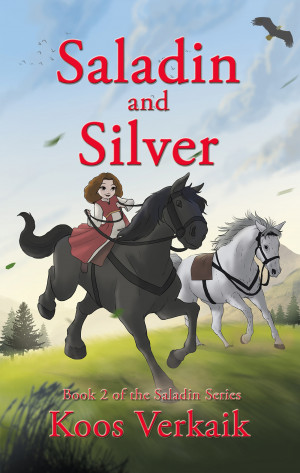 Saladin and Silver - Book 2 of the Saladin Series

By Koos Verkaik
Angie is far away from Nottingham and the castle of the prince. Faithful to King Richard the Lionheart and never afraid of the great adventure…
Of course she rides Silver. Angie meets the oddest people – a tinker, Joe and his bear Bruto and especially the spoiled Princess Wanda, daughter of Prince John, who is after her favorite horse! More
Turbulent times in England, where Prince John temporary sits on the throne of his brother, Richard the Lionheart. This prince, so turned out soon, was rather busy to enrich himself than reign over his land in an honest way. King Richard the Lionheart joins the crusade and Prince John, who can count on the support of Norman knights, is out on money and power and imposes the highest taxes.
Angie, a poor Saxon girl, gets involved in all these events when she tries to keep Silver, her favorite horse, out of the hands of the prince. Whilst on the run, she meets a mysterious knight who grants her his horse. It is Saladin, a black stallion from a faraway, unknown country. This wonder horse teaches all his tricks to the beautiful young stallion Silver.
And this way Silver comes to be a wonder horse as well – thanks to the great Saladin who later will be the horse of no one less than Robin Hood.
Robin Hood, who lives in the forests of Sherwood with his brave men, fights against the terror of the prince and has remained faithful to the king. And he knows he can count on Angie and Silver!
The girl has brought the anger of Prince John on herself by taking Silver along with her and win a race with the mighty Saladin that should have been won by Norman knights…

Koos Verkaik, a ‘Dutchy’ with spunk and an inexhaustible drive and fathomless imagination, is one of the most productive authors of the moment.
We deem it our special privilege to work with an author of his caliber and have him on board. Besides a fast growing pile of novels in his specific genre: Mystery, Adventure and Magic, he also writes children’s books.
Koos wrote his first novel, a sci-fi, when he was only eighteen years old, during a weekend; it was published immediately—he was only sixteen when he wrote a series about a young space traveler who went in search of adventures on a far-away planet; it got published in the weekly newspaper (three pages each week). He wrote his first novel, the Sci Fi Adolar, in a weekend! It got published right away… He published with big Dutch publishers such as De Arbeiderspers in Amsterdam. With his books All-Father and Wolf Tears, he earned the name critics gave him of The Dutch Stephen King.
Koos Verkaik is the writer of about 60 books, both children’s books and novels, many hundreds of comic scripts, he has been a copy writer and is working on different screenplays and new novels now.

You have subscribed to alerts for Koos Verkaik.

You have been added to Koos Verkaik's favorite list.

You can also sign-up to receive email notifications whenever Koos Verkaik releases a new book.