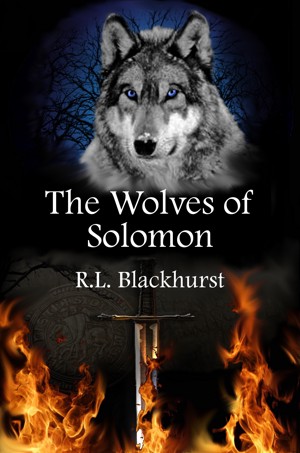 By R. L. Blackhurst
Rated 3.00/5 based on 1 reviews
England, 1307. . .
Templar Knight Galeren de Massard is sent to investigate an incident where a nun claims to have been attacked by "a man who became a wolf." When Galeren meets Catherine, he instinctively knows that her attacker was Esquin de Floyran and that his return is dangerous for the increasingly unpopular Templar Order.
A supernatural tale revolving around the fall of the Templars. More
England, 1307 . . .

Templar Knight Galeren de Massard is sent to investigate an incident where a nun claims to have been attacked by "a man who became a wolf." When Galeren meets Catherine, he instinctively knows that her attacker was Esquin de Floyran, an old foe, and that his return is dangerous for the increasingly unpopular Templar Order.

Out for revenge, De Floyran has betrayed his brotherhood's secret to the French King who has long sought to discredit the Templars. When he discovers the truth of their nature, he vows to destroy the Order and have the Knights burned to the last.

When hundreds of Templars are arrested in France and Catherine is taken by De Floyran, Galeren resolves to rescue her and save as many of his brethren as he can. Alone, he journeys to France and into the heart of danger to face his enemy and risk everything to save his race from destruction.
Download: epub mobi (Kindle) pdf more Online Reader
rtf lrf pdb txt
Price: Free! USD
Add to Library
Create Widget
Tags: paranormal romance speculative fiction supernatural dark fantasy werewolves shapeshifters action and adventure historical fantasy knights templar medieval fantasy
About R. L. Blackhurst

Rebecca Blackhurst was born in Essex in 1972 but grew up in Bahrain and southern Spain. Possessing an incurable wanderlust, she travelled the globe for years before settling back in the UK to complete a degree in Earth and Planetary Sciences and PhD in Astrobiology.

Growing up on a diet of science fiction and fantasy, Rebecca scribbled down stories and ideas for years but only after moving to New Zealand, for a change of lifestyle, was she able to get her teeth into writing.

Rebecca published her first book, "The Wolves of Solomon," in 2010, an historical fantasy novel based on the fall of the Knights Templar. The sequel "Wolf" followed in 2011. Driven by her characters, she is currently working on a prequel in the series, "Blood and Brethren."

Having a passion for wolves, Rebecca has two German shepherds and can often be heard howling into the night with her pack.

Also in Series: Wolves of Solomon

This is a brilliant amalgamation of historical fact, a ton of fiction, werewolves, revenge, conspiracy and good ol' action adventure very much in the theme of Three Musketeers and similar stories. Blackhurst combines the traditional stories that surround the Templar Knights with a good dose of werewolf lore and the usual romance, damsel in distress and saving world order that such historical tales require in a fairly seamless and fast paced story. We find ourselves following a number of the characters as they set out to save themselves and others, protect the Templar Order or to wreak havoc across the known world and destroy the Order getting revenge on their enemnies in the process. Each of the characters is well founded and develops over the course of the story, including interesting bits of back story and previous encounters. The only issue really is with some of the writing as there is a good amount of additional unnecessary wordage used which makes the book more cumbersome than it needs to be. But as the story is such a good one it doesn't suffer too much because of this. I did have some issue with how Catherine was portrayed as she couldn't seem to decide between being the damsel in distress or being a hard ass (personally she should've stuck with the latter, she obviously has the balls to do it so do it!), but this is very much a personal preference. Overall a pretty damn good read.

(reviewed 3 years after purchase)
ADAM SEWELL reviewed on on July 11, 2012
(no rating)
GREAT story. Well done RL Blackhurst. Loved the in-depth descriptions and the way the characters and story drew me in with a clear picture of what was going on. Looking forward to reading the sequel.

You have subscribed to alerts for R. L. Blackhurst.

You have been added to R. L. Blackhurst's favorite list.

You can also sign-up to receive email notifications whenever R. L. Blackhurst releases a new book.