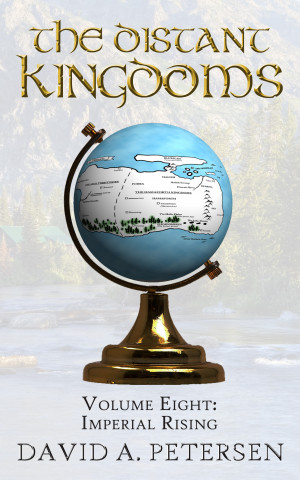 By David A Petersen
The once unassailable city of Terrimorter has fallen to the forces of Colin Bourke and the might of his army. The illegally detained members of the Royal family Thellon have been freed, along with any others held captive within the imperial Palace. Ruler Jom Azzer has been exiled and his wife, the Empress Dearer Azzer no longer resides with the living. More
THE IMPERIAL PALACE- The official residence of Ruler Jom Azzer and his wife from where they reign over the Azzil Territories with absolute impunity.

DARA MINNIN – The girl destined to be the Empress of all the Azzil Territories.

The once unassailable city of Terrimorter has fallen to the forces of Colin Bourke and the might of his army. The illegally detained members of the Royal family Thellon have been freed, along with any others held captive within the imperial Palace. Ruler Jom Azzer has been exiled and his wife, the Empress Dearer Azzer no longer resides with the living.

Colin Bourke has fled the scene of the assault on Terrimorter and is nowhere to be found. Afterwards, life continues within the city and Imperial palace as everyone adjusts to the new rule within all of the Azzil Territories. Entell Thellon, the Third takes full control over his former enemies, only to immediately place his eldest son on the Imperial throne, thus making him, Emperor Entell Thellon. The King then commences arrangements to have his son betrothed to a suitable girl to continue their linage on the throne.

Connie York and Cark Buchanan begin a relationship only hinted at during the final moments of the invasion. Sean Corrigin does not particularly care for this arrangement and becomes something of a pest. Lorraine Montague is recuperating in the local hospital and accepts the marriage proposal of the Rider, Immir Hanis. Victor Chan has been officially assigned to run the very same medical facility but finds himself constantly at odds with the current hospital staff and their rather ‘traditional’ medical practices.

Lieutenant Gary Wyndham and his crew now have the difficult task of extracting the Iroquois helicopter from out of the River Encasler and bring the aircraft to a flight ready status. This has now become a necessity as many of the Beyonders have been ordered to travel to the far northern city of Innolin to discover what has taken place at the naval base. Carl Buchanan, the Confederate soldiers who survived the invasion and Sergeant Major Walter Bradshaw and his redcoat squad have also been asked to travel north to assist with this mission.

Ernest Bonaparte is feeling the psychological effects have having participated in the military intervention on the city. His inner demons are helped by the direct intervention of the other Americans currently billeted in the imperial palace. Realising he has no real purpose in Terrimorter, he readily volunteers to return home to his wife and children at the first available opportunity.

Having been ordered to leave Terrimorter and indeed the entirety of the Azzil Territories, those members of the invading army not afflicted with any grievous body injuries from the attack depart from the city under the command of colonel Ferran Cintras. The commanding officer has also announced his resignation from the Hamaforth Armed forces which will come into effect as soon as they reach their destination of the city of Valderhien.

Another expedition, led by the former Lord Protectorate, Thellic, likewise take their leave from Terrimorter along with the off-world members of the invasion force and a great many local troops. Sean Corrigin accompanies this party as the new Emperor’s official representative.