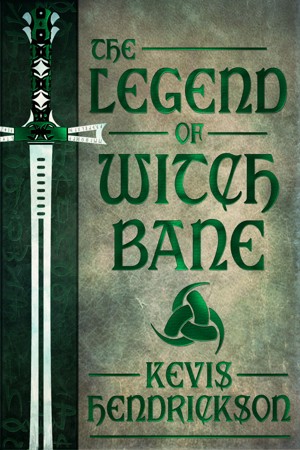 The Legend of Witch Bane

By Kevis Hendrickson
Three children embark on a dangerous quest to defeat an evil queen who has put a spell on their kingdom. To save their people they must find Witch Bane, a magical sword with a mysterious past. It will take all their courage to survive the malevolent forces of evil gathered against them. Will they fail or will they succeed? Prepare for the adventure of a lifetime! More
Three children embark on an epic journey to save their kingdom...

High Queen Rhiannon Eldess has placed the kingdom of Kaldan under a terrible curse. Only Kòdobos, Anyr, and Laris can save their people from a dark fate. Danger awaits the children as they face the queen's evil minions in their desperate quest to save their kingdom.

To gain final victory the children must find Witch Bane, the magic sword which will give them the power to defeat Rhiannon once and for all! But a prophecy foretelling of the return of an ancient evil threatens to doom them all. It will take all their courage to survive the malevolent forces of evil gathered against them. Will they fail or will they succeed? Prepare for the adventure of a lifetime!

Kevis Hendrickson is the author of eight Science Fiction and Fantasy novels, including The Legend of Witch Bane and the Rogue Hunter series. His second novel Rogue Hunter: Quest of the Hunter won the Red Adept Annual Indie Award (2010) for 'Top Science Fiction'. His most recent novel is Rogue Hunter: Valor. The sixth book in the series, Rogue Hunter: Death Moon, is scheduled for release in 2017. Along with an epic fantasy re-telling of Cinderella, he is working on a brand new urban fantasy series which also makes its debut this year.

You have subscribed to alerts for Kevis Hendrickson.

You have been added to Kevis Hendrickson's favorite list.

You can also sign-up to receive email notifications whenever Kevis Hendrickson releases a new book.