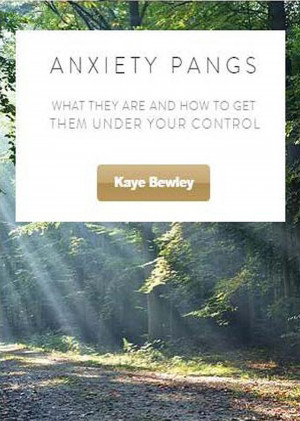 By Kaye Bewley
Those awful anxiety pangs come at great cost. Learn how to handle them so they work for you instead of against you. More
Would you like to know how to get those anxiety pangs under your control? This is a guide book that gives you practical instructions and informative directions, worksheets and to-do lists. Each will help you identify what anxiety is, how to handle it when it comes into your life and what do to about it when you are debilitated by it.

A qualified psychotherapist, Kaye Bewley, earned her MA after studying about the differences and similarities between genders in the workplace. Her interest lay in how people coped under stressful situations and how they responded to whatever made them feel anxious.

Kaye has been a journalist/presenter/author in factual television and media for many years (BBC News, ITN, Channel 4 News) and has written twelve books.

Kaye wrote ‘For the Love of Sweet William’, which tells a fictionalised tale centred on her job in news media. There, she tells of a bully-boss and a misfit team of production assistants at the BBC, how she fell in love with a movie star and left behind the suburbs of London forever.

Kaye’s other books deal with the link between mind and emotions. She describes how you can get a handle on anxiety and also find out how that's really not as hard as it seems. She also shows how ordinary people around the world can get themselves out of the murky depths of depression by following a few simple rules. By going through personal trauma and turmoil, and earning her own Masters degree in the subject, Kaye can reveal the steps of real emotional control she used herself.

When not writing on the subject of psychology, Kaye continues to create stories based on real people in real situations. ‘Saturday Rendezvous’, ‘In the Right Place’ and ‘A Ring Around You’ are her first feature length film scripts, available to option, while ‘A Tinker’s Tale’ is the first episode of a television script based on the famous John Bunyan, a Baptist preacher in the 1600s, a play of which was staged in Surrey over 20 years ago.

Due out soon, Kaye’s new book ‘Borderline in Sicily’, is the first of a series of revealing memoirs currently in production.

You have subscribed to alerts for Kaye Bewley.

You have been added to Kaye Bewley's favorite list.

You can also sign-up to receive email notifications whenever Kaye Bewley releases a new book.