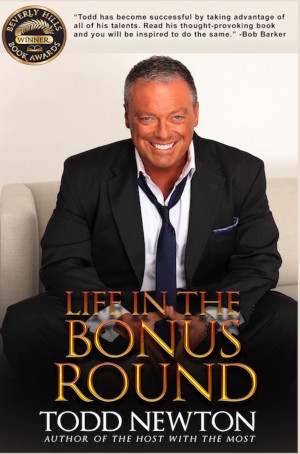 Life In The Bonus Round

By Todd Newton
Join popular TV personality Todd Newton for an entertaining and inspirational telling of a life and career filled with dreams and schemes. The Host With The Most® holds nothing back as he shares his journey from a small town radio station to some of North America's most extravagant stages. More
Often referred to as The Host With The Most®, Daytime Emmy Award-winning TV personality Todd Newton sets the autobiographical world on fire with his insightful and entertaining life story. From being rejected by a small town radio station to commanding some of the largest stages in North America, Newton's experiences will make you laugh while shining a light on your path.
Step inside the Bonus Round with this proud father, entertainer, and philanthropist as he plays for the most fabulous prize of them all: a life well-lived!

Todd Newton, one of the most respected and amiable hosts on television, is best known for his work as a Daytime Emmy® Award winning game show host. The man often referred to by industry insiders as The Host with the Most® has awarded contestants over fifty million dollars in cash and prizes on shows such as Family Game Night, Whammy, Monopoly Millionaires' Club, and The Price Is Right Live-an interactive stage version of America's favorite game show now touring North America.
In addition to his work in front of the camera, Newton is the author of multiple books including the entertaining and inspiring memoir, Life in the Bonus Round, The Host with the Most: Tales of a Tattooed Television Personality, and the hilarious nine-act play, First and Last Month.
Personally, Todd Newton is the proud father of two amazing children and an outspoken voice for animal rescue organizations nationwide.

You have subscribed to alerts for Todd Newton.

You have been added to Todd Newton's favorite list.

You can also sign-up to receive email notifications whenever Todd Newton releases a new book.