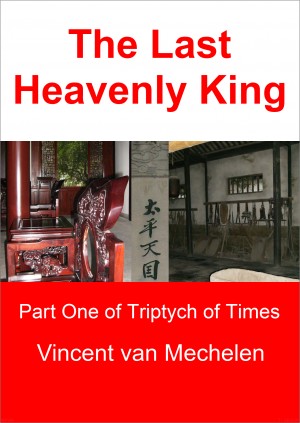 By Vincent van Mechelen
In this first part of Triptych of Times Hong Kuiyuan tells his personal story of the collapse, in 1864, of the Christian theocracy established by his uncle, the first Heavenly King, during 'the Taiping Rebellion' in China. His relatives, including the new King, are killed by the imperial Qing, but the sixteen-year-old Kuiyuan manages to survive. Later in life he will write this historical novella. More
'The Last Heavenly King' is the first part of Triptych of Times, a trilogy spanning a period of more than 260 years, in which members of the Persoon-Hong family migrate from China to the Guianas, from the Guianas to the Netherlands and from the North Atlantic region to Namibia. The second part is Waiting Can Wait, a (near-)contemporary novella which is both playfully tragicomic and philosophically serious, and the third part Legends of the Future, a novella of ideas 'written by Sondaha Persoon'. Parts Two and Three are not (yet) available as ebooks.

'The Last Heavenly King' is a historical novella whose real writer may be Vincent van Mechelen, but whose fictional writer is Hong Kuiyuan, an equally real person who was born near Guangzhou (Canton) in 1848. Hong Kuiyuan tells his personal story of the collapse, in 1864, of the Taiping ('Great Peace') Heavenly Kingdom, founded by his uncle Hong Xiuquan, the first Heavenly King. The Chinese and foreign enemies of the Heavenly Kingdom used to refer to it as 'the Taiping Rebellion', and this unparalleled episode in human history is still generally known by that name today.

The story starts with the fall of Nanjing, which was called "Tianjing" or "Heavenly Capital" by the God-worshipers. When the last town, Huzhou, is lost to the imperial Qing too, the survivors flee in the direction of their Hakka homeland, but in the end they fare no better then the ones they left behind. Kuiyuan's father, the Shield King, and his fourteen-year-old cousin, the Young Monarch, are also captured and executed. The sixteen-year-old Kuiyuan himself escapes but is later captured and abused by pirates. When he finally arrives in Hong Kong, his hopes are shattered again.

Machiel Vincent van Mechelen is a native of the Netherlands who also lived and worked in Canada as a landed immigrant. While still being taught Dutch, French, English and German, 'Machiel' –as Vincent was called then– received a science-oriented secondary education. The formative influence of the exact sciences continued at the academic level, but the arts, pure or applied, life and social sciences and ethics later played a significant role as well or started to receive a greater emphasis. Eventually, Vincent graduated from three different universities, in landscape architecture, in philosophy and in English language and literature (in this order, with diverse jobs in two continents, a one-year trip around the world and a period of studying informatics in between).

In the course of about thirty years, Vincent van Mechelen wrote philosophical, (neutral-inclusive) ideological, literary and linguistic books and papers, short stories, a play and poems, among which songs, all labors of love, one of them a Vocabulary of Alliteration. Most of the author's work is in This Language (what many may consider 'American English'), a part in Deze Taal ('Dutch') and some of it in Zhezhong Yuyan ('Putonghua Chinese'). Since the advent of the Internet Vincent's main mediums of publication have been MVVM-site (mvvm.net), a private site, and TRINPsite (trinp.net), a site owned by a nonreligious denominational foundation. A few books have now been self-published in print and as ebooks.

The first ebook which appeared at Smashwords was The Last Heavenly King, part of Triptych of Times, a trilogy consisting of The Last Heavenly King, Waiting Can Wait and Legends of the Future, all three novellas in themselves. As the beginning describes the final days of the 'Taiping Rebellion' (only 84 years before Machiel first saw the light), it should be of interest that the author visited China (including Hong Kong, Macao and Taiwan) several times and still studies Chinese – at an intermediate level, that is.

The Metric Calendar, a Metric Diary is Vincent van Mechelen's second ebook. It is published at the same time as Metric Diary, a printed diary using the Quaternary Metric World Calendar. The ebook contains the Metric Diary (in color) on screen, but unlike the Diary on paper (in greyscale), it explains first the basics of a systematic calendar such as the Metric Calendar. This explanation is a good illustration of a way of thinking which is not bound by the magic of baseless, if not supernaturalist and/or exclusivist, tradition; not bound by arbitrariness or irrelevance, however 'normal' a majority in a particular place at a particular time may deem a belief or practice to be. (Incidentally, and yet not too coincidentally, the Metric Calendar also plays a role in Triptych of Times.)

On MVVM-site at http://mvvm.net you will find additional public data about Vincent van Mechelen and other works by the same author under the same civil name. For more about Triptych of Times with the Last Heavenly King see tot.mvvm.net. For more about the Metric Calendar and a Metric diary see metric.mvvm.net. These subdomains provide direct links to the most recent information.

Reviews of The Last Heavenly King by Vincent van Mechelen

You have subscribed to Smashwords Alerts new release notifications for Vincent van Mechelen.

You have been added to Vincent van Mechelen's favorite list.

You can also sign-up to receive email notifications whenever Vincent van Mechelen releases a new book.