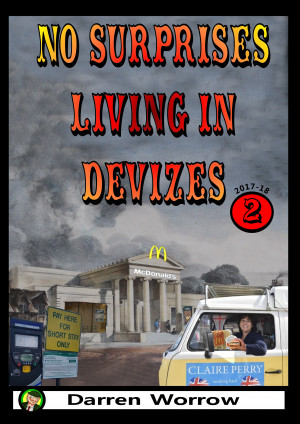 No Surprises Living in Devizes 2

The deliberate satirical slant towards the underdogs, in this, our Tory town, went flying over the heads of many, who angered perhaps a bit too much. I fear I lost some avid readers to the Daily Mail. Well, I say fear.

During the times of lesser political avalanche, the natural progression towards creating Devizine, my local what’s-on guide website, can be seen through the book; if I knew then what I know now…..

I was born in the Fling Dynasty of a small planet known as Duncan in a galaxy far, far away. My humble parents, believing the planet was on the eve of destruction, sent me off as a baby in an egg-shaped craft and I landed here on planet Earth in the spring of 1973. I was later to discover through a cavern of ice, as you do, that the planet was fine all the time and it was just a particularly nasty prank by my father’s mates down the pub.

I landed in a deep jungle and was raised by a company of wolves, learning to live as they did. Until one day when a naughty tiger with a very English accent came along and I was whisked away by a black panther and a jazz singing bear to a man-village. It wasn’t the tiger I was worried about; it was the American cartoon producer following on behind him.

It was at the village that I won a golden ticket to visit a chocolate factory where I fell into a river made of chocolate and was sucked up a pipe into a fudge room; happy days. It could have been worse; I heard some other kid turned into an exploding blueberry.

I lived at a coastal Inn for a while until an old sailor paid me a penny to look out for a legless seadog; what a cheapskate. In finding him I discovered a treasure map and was promptly whisked away by a sailor to a Caribbean island where I got into a bit of a rumble with some pirate radio DJ called Captain Tony Blackbeard. It was that or another holiday in Clacton.

At eleven I was taken away by a man with an uncanny resemblance to actor and comedian Robbie Coltrane to a school for wizards where I had to battle it out with some bald blue bloke who killed my parents, said he was a lawyer working for an author called JK Rolling or something. That wasn’t as bad as the frog flavoured semolina we had to eat for school dinner.

As I grew up and went to college I decided to give my favourite toys, a cowboy and a space ranger, away to a snotty girl from around the corner, nobody told me the cowboy was really Tom Hanks otherwise I would have given them away a lot sooner.

So, other than the time I was bitten by a rare spider and found myself with special arachnid powers which I used to defeat an evil leprechaun, I left college and it was all very uneventful.

Nowadays I have settled down to a family life and enjoy writing books, striving to be more like Bruce Bogtrotter every day. People say “where do you get your ideas from?” I tell them I have no idea, I've had such a boring, everyday life.

If you really can be bothered to know more about me why don’t you visit my website at www.darrenworrow.webs.com and find out even more honest facts?

Reviews of No Surprises Living in Devizes 2 by Darren Worrow

You have subscribed to alerts for Darren Worrow.

You have been added to Darren Worrow's favorite list.

You can also sign-up to receive email notifications whenever Darren Worrow releases a new book.