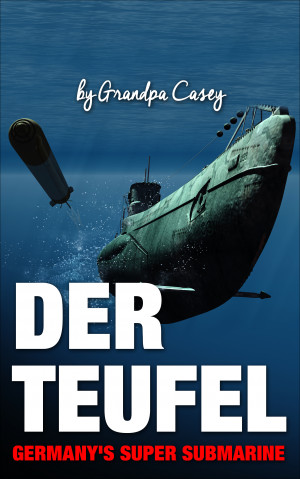 By Grandpa Casey
As the Great War (World War One) raged on, Germany realized they needed submarines capable of reaching Canada, sinking cargo ships and returning to Germany, without refueling.
While the first such submarine, code named Der Teufel (The Devil), was still being build, two British Agents were sent to find and destroy it. To this day, no records were ever found and both sides deny it ever exited More
During the Great War (World War One), Germany’s submarines were raising havoc on cargo ships heading for England.
Because the Atlantic Ocean is so big, they were unable to attack every ship that left Canada. To solve this problem, Germany decided to build Super Submarines, that could lie in wait and attack the convoys as they left Canadian waters. Also, as a terror tactic, they planned to attack ships docked in Canadian harbors.
The U-6160, that was code named “Der Teufel (The Devil)”, was to be the first one.
Where the Germans were building the submarine, a British raid by air, land, or sea, was impossible. Because of that, two volunteers were sent to destroy this new monster of the sea.
While in Germany, those agents were helped by a group, that called itself, “Polski Patrioci (Polish Patriots)”, who want to liberate their homeland.
To this day, the Germans deny the existence of the submarine. Because no records exist, those that knew about the U-boat, took that information to their graves. Except for anonymous testimony, even the British deny it ever existed.
This story, though considered fiction,
could be true.

I'm a retired Grandfather who likes telling stories to my Grandchildren. Now that they are older I want to share them with everyone. My books are my credentials.

A percentage of the profits, from all my books, will go to ZFRF, a nonprofit organization that helps families of people with cancer. For more information on ZFRF visit www.zfrf.net

You have subscribed to alerts for Grandpa Casey.

You have been added to Grandpa Casey's favorite list.

You can also sign-up to receive email notifications whenever Grandpa Casey releases a new book.