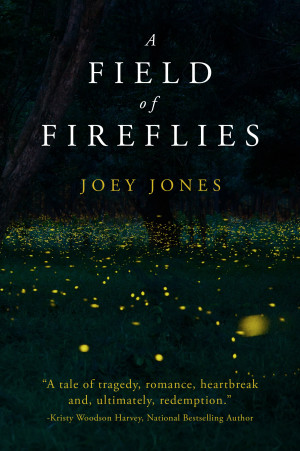 A Field of Fireflies

By Joey Jones
Emotionally complex and charged with suspense, A Field of Fireflies is the unforgettable story of family, love, loss, and an old baseball field where magic occurs, including the grace of forgiveness and second chances. More
Growing up, Nolan Lynch’s family was unconventional by society’s standards, but it was filled with love, and his parents taught him everything he needed to know about life, equality, and family. A baseball player with a bright future, Nolan’s on his way to the major leagues when tragedy occurs. Six years later, he’s starting over as the newest instructor at the community college in Washington, North Carolina, where he meets Emma Pate, who seems to be everything he’s ever dreamed of—beautiful, assertive, and a baseball fan to boot.

Emma Pate’s dreams are put on hold after her father dies, leaving her struggling to keep her family’s farm. When a chance encounter with a cute new guy in town turns into an impromptu date, Emma finds herself falling for him. But she soon realizes Nolan Lynch isn’t who she thinks he is.

Drawn together by a visceral connection that defies their common sense, Emma’s and Nolan’s blossoming love is as romantic as it is forbidden, until secrets—both past and present—threaten to tear them apart. Now, Nolan must confront his past and make peace with his demons or risk losing everything he loves . . . again.

Emotionally complex and charged with suspense, A Field of Fireflies is the unforgettable story of family, love, loss, and an old baseball field where magic occurs, including the grace of forgiveness and second chances.

Joey Jones' writing style has been described as a mixture of Nicholas Sparks, Richard Paul Evans, and James Patterson. The ratings and reviews of his debut novel A Bridge Apart (2015) and his second novel Losing London (2016) reflect the comparison to the aforementioned New York Times bestselling authors. Readers can anticipate the same from his new novel A Field of Fireflies, expected to release in March 2018.

Joey Jones fell in love with creative writing at a young age and decided in his early twenties that he wanted to write a novel. His debut novel A Bridge Apart is a suspenseful love story that was years in the making as he tinkered with the book off and on while working full-time in the marketing field. In February 2016, Jones became a full-time novelist and published his second novel Losing London later that year.

In his spare time, Jones enjoys spending time with his family, playing sports, working out, reading, and writing inspirational quotes. His favorite meal is a New York Style Pizza with a Mt. Dew. He won the 8th-grade spelling bee at his school, but if you ask him how many students participated, he’ll likely say, “Such minor details are not important!” He currently lives in North Carolina with his family.

Joey Jones earned a B.A. in Business Administration from the University of Maryland University College where he graduated with honors (2006). He was the owner of a full-service advertising agency and taught business and marketing courses as an adjunct college instructor.

Jones is currently writing his fourth novel, and he invites you to connect with him online to find out more about the upcoming novel, book signings, giveaways, exciting news, charities, and more.

You have subscribed to alerts for Joey Jones.

You have been added to Joey Jones's favorite list.

You can also sign-up to receive email notifications whenever Joey Jones releases a new book.