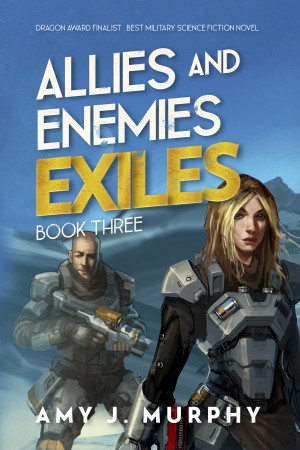 By Amy J. Murphy
If you're going to start a war, know what you're risking.

Ironvale. Splitdawn. Poisoncry. Three bloodthirsty guilds that control the decaying corner of space called the Reaches. This balance of power is at a tipping point. One nudge and chaos reigns. Sela Tyron is willing to supply that nudge to help her partner, Jon Veradin with an important rescue. More
If you're going to start a war, know what's at stake.

Ironvale. Splitdawn. Poisoncry.
Three bloodthirsty guilds that control the decaying corner of space called the Reaches. This balance of power exists at a tipping point. One nudge and chaos reigns.

Sela Tyron is willing to supply that nudge to help her partner with an important rescue. Even if it means trusting a shifty double-agents. Or turning herself into an assassin.

Suit up. Time to join the fight.

If you love gritty, epic space opera like The Expanse or Firefly, this third installment in Allies and Enemies series is custom made for you. Voted a Dragon Award Finalist for Best Military Science Fiction Novel by Dragon Con.

Amy J. Murphy is not a Jedi. (Although she’s married to this Scottish guy that claims to be one.) But, she is a fantastic liar.

She discovered this power at an early age and chose to wield it for good instead of evil. (The evil part remains highly tempting.) With this power, Amy writes space opera books with kickass heroines. These books are sometimes confused for military science fiction which is an easy mistake to make. She’s ok with this as her debut novel, Allies and Enemies: Fallen, was a finalist for the 2016 Dragon Award for Best Military Science Fiction or Fantasy Novel. It so happened that her third book, Allies and Enemies: Exiles, was named a 2017 Dragon Award finalist in the same category. At some point, she infiltrated the ranks of the Science Fiction and Fantasy Writers of America (SFWA).

When not geeking out at science fiction conventions, she lives in Vermont with the aforementioned Scotsman/Jedi and two canine overlords. Most recently she’s been named a 2017 Kindle Book Award Finalist and her work appeared in the Amazon best-selling space opera anthology, Orphans in the Black.

About the Series: Allies and Enemies

Praise for Allies and Enemies: Fallen

For fans of space operas like "Farscape" and "Firefly," this novel -- the first in a trilogy -- is well worth a look. Genetically engineered to be the loyal soldier of a totalitarian intergalactic regime, Sela Tyron follows her sense of right -- and her heart -- when her commanding officer becomes a wanted fugitive. The propulsive plot involves family secrets, ancient mythology, "mindjacking" and plenty of kick-assery, with a refreshing gender reversal. Given the flowing prose, fast pacing, believable characterization and world building, it's no surprise Fallen was chosen by SF fans as a finalist for the 2016 Dragon Awards.

A solide sci fi tale. It has a nice layered storyline with a relatively fast paced plot... everything you would want in a sci-fi suspense space opera.

Also in Series: Allies and Enemies

You have subscribed to alerts for Amy J. Murphy.

You have been added to Amy J. Murphy's favorite list.

You can also sign-up to receive email notifications whenever Amy J. Murphy releases a new book.