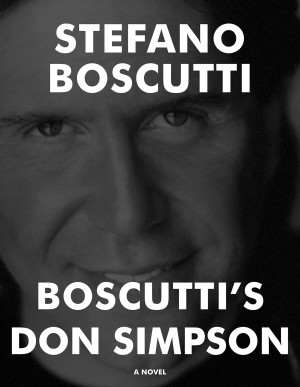 Outrageous Hollywood super producer Don Simpson wants to do something good with his life. But all the hookers and drug dealers and movie stars just keep getting in the way. Simpson teamed with Jerry Bruckheimer to create the high concept blockbuster that changed the business for ever. Now he wants to change himself.

"BOSCUTTI'S DON SIMPSON" is a wild Hollywood novel More
Nothing succeeds like excess.

Outrageous Hollywood super producer Don Simpson wants to do something good with his life. But all the hookers and drug dealers and movie stars just keep getting in the way. Simpson teamed with Jerry Bruckheimer to create the high concept blockbuster that changed the business for ever. Now he wants to change himself.

"BOSCUTTI'S DON SIMPSON" is a wild Hollywood novel. It's based on an award-winning screenplay. It's a brilliant, freewheeling look at a life in free fall.

Will the notorious Simpson overcome his demons and finally make a film he is proud of?

'Like Elvis, Don Simpson died in the bathroom for our sins.' Lynda Obst

'Don Simpson symbolized the kind of extravagant, excessive, larger-than-life figure who is drawn to Hollywood, one whose personal demons grow hand in hand with successes and personal fortunes.' New York Times

'The average Hollywood tycoon prefers to be discreet about such plunder. But Don Simpson was an animal, and the suave masters in silk suits were tickled that he was so naked, so acting out with it.' The Independent

'Simpson's uneven temperament inspired fear in underlings and awe among some of the biggest names in Hollywood.' Los Angeles Times

'Blistering fuel-injected no-holes-barred look at everything that went wrong with Hollywood.' Patricia Walden

'Boscutti has found a character and a narrative mode that exploits all his strengths.' Tom Rabins

'Fascinating imagining of the hellish battles Simpson fought with himself and everyone around him.' Lisa Timmermann

'Ambitious, complex and powerful novel with a narrative intensity that sears the soul.' Robert Ferguson

'Remarkable and rhapsodic novel about the life of movie mogul spinning out of control.' Eric Shannon

'Overwhelmingly vivid and powerful rendering of a man who outlived his own myth.' Kim Stenson

'Charged and thrilling experience that will leave you breathless with anticipation.' Philip Galloway

Based on an award-winning screenplay. Includes Bonus Author's Note, Author's Interview and Opening Pages of Stefano Boscutti's Next Novel.

STEFANO BOSCUTTI is an independent writer and director. He loves stories about true life mavericks who's wild ambition leads them to soar too close to the sun. Way too close. Boscutti's stories are usually laced with humor and a slap of irony. He likes to write (and read) fast. Real fast. He once won a junior high school swimming race. But that's about the extent of his sporting prowess.

It was actually by chance that I found this book and I am overjoyed that I did. I must say, this is a fantastic piece of work. Boscutti's style of writing is unique, from the characters names in all caps, the single word sentences, and the sarcastic wit, it makes this author truly original. I absolutely loved this book from start to finish. Because of stumbling upon this book, I actually read his other books as well, "You know what I like to do at four o'clock, Ed?" and "Selling Anne Frank" I definitely would recommend anything by this author.

(reviewed the day of purchase)
GoPassion Press reviewed on Sep. 9, 2011

Have you ever wondered what it would be like if Steve Buscemi was an author instead of an actor? I have. I wondered if his speaking voice would carry through to his writing voice and what that would “sound” like.
The book would read something like:
Stop.
She wore red.
Wait.
Come back.
I like red.
Red is pretty.
It goes with her hair.
End.
Just very cut and dry, short stop sentences. No real description because it’s obvious what’s going on.
I was given a chance to read a book by Stefano Boscutti called Boscutti’s Don Simpson (Novel). Up to this point I had never heard of Mr. Boscutti, but as with all books I will read anything once.
I was a little worried when I first started this book. I felt like I was starting to read a screenplay with the first line “Fade up live version of JIMI HENDRIX’S psychedelic ‘Are You Experienced?’ under flashes of ‘Dangerous Minds’ movie poster with MICHELLE PFEIFFER……”
And what’s up with those caps?
Every famous person mentioned in this novel is done in all caps. Now, I have read many novels in my 36 years of life but I can honestly say I have never read a novel where there were caps for people’s names. Nor have I read a novel where it feels like you are reading an autobiography turned screenplay.
I have now. And I was greedy in absorbing every word of it.
Fade to black.
Don Simpson, (http://en.wikipedia.org/wiki/Don_Simpson) 1943-1996, was the film producer responsible for such hit movies as Flashdance, Beverly Hills Cop, Top Gun and The Rock. You may know his partners name, Jerry Bruckheimer, more than you might know Simpson.
I am not sure why that is. I have seen these movies over and over again, and Simpson was never a name that stood out for me.
This is not a biography. It’s not even a memoir. It’s purely a work of fiction. I have one word for it:
Brilliant.
Or in this case it would be BRILLIANT!
Descriptive, but short and to the point.
It’s not long.
It’s not all drawn out.
It’s right to the point.
So where does Steve Buscemi fit in to all of this? He’s in my head. As I read this novel I found myself reading it as if the voice was Buscemi because I guess my brain was telling me that’s how Simpson would sound if he were telling his story out loud. Or, if this were happy hour story time, the voice reading to us would be Buscemi. It is what it is, I have no other explanation. Sometimes my brain has a mind of its own.
Boscutti picks the novel up the day that Don Simpson went into cardiac arrest for combined drug intoxication. Ouch. What follows is Simpson “speaking” at the beginning of every chapter and then the rest of the chapter is the “story” of the events in Simpson’s life. You get the sense that this is one of those stories that he’s “telling” or remembering in his head as his life fades away. He is alone and there is nothing anyone can do to save him.
Stories unfold about drug addiction, alcohol, sex addiction, S&M sex fetish, plenty of foul words, prostitution, and a behind the scenes look of the movie business.
Is it fact or fiction? It makes you wonder. Every time another star is mentioned I start thinking back to that time period and wondering, “Did this really happen”? Do I remember this?
No.
Ok.
Well, maybe it DID happen?
Is it live? Or is it Memorex? Oh, poo. You know I just had to say it. Its so cliché, its perfect.
Once you get through the 100 and some chapters, don’t worry, they are short and to the point, you reach the Authors Note. Because I have never read a story written like this I really wanted to find out more.
This is what Boscutti has to say “I’m fairly excitable, brisk-talking person. So, if that’s how I communicate with words coming out of my mouth, that’s how I am going to communicate with my words coming out of my fingers onto the keyboard. I tend to have short sentences, pretty abrupt. Some may call it jarring. I’ll chop out unnecessary words to speed up the text, to accelerate the story. ………chops intro and outro to speed up the story……favor words that can do the job in two syllables rather than three…..avoid literary-type words…..I don’t want to write typical stories that live in books, that live and die on the page. I want to liberate my stories. I want to electrify them. I want to give them life. “
Why suddenly do I feel like giving the finger to half the literary agents I know?
I have written like this. Not a full- fledged novel, but rather some web posts and had people bash me for calling myself a writer, well, really I was just a blogger, and telling me I had so style.
Really?
Well, maybe in this day and age there really is no style.
While this was supposed to be a book review, I fear it has turned into more of an author review. But when a novel is good, the author is good and I feel Boscutti’s writing style with Buscemi voice deserves to be noted.
I wonder if he needs an apprentice. I could use a short sentenced mentor.
Well done, Maestro. Well done.
Now, readers, go!
I mean RUN!
Well, I guess we don’t run in the virtual world but just click on over to the website of your choice where you get your books and get this book. While you are there, check out some of his others, I know I will.
I think Elvis will be entering the building since Simpson just checked out.