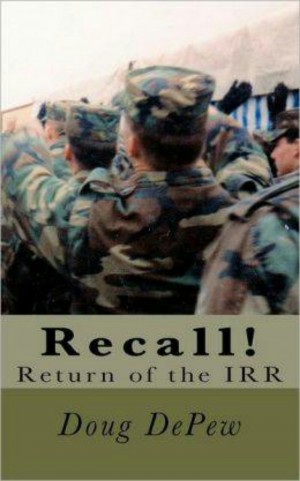 Recall! Return of the IRR

By Doug DePew
Rated 5.00/5 based on 3 reviews
They came from cities, farms, and towns all across the country. They had long hair, beards, and bad attitudes. They dropped everything in January of 1991 and reported as the president ordered. They were not happy about it one bit. In this true story, the author relates his experiences as one of 20,000 people recalled to active duty in support of Operation Desert Storm. This is exactly how it was. More
There hadn't been a full-scale recall of the Individual Ready Reserves since the Korean War in January of 1991. With the fall of the Berlin Wall and the collapse of the Soviet Union, many people believed it would take World War III to trigger a recall of the IRR. Many people were wrong.

They came from cities and farms and towns in every corner of the country. With only a few days' notice, they quit their jobs, dropped out of college, kissed their girlfriends or wives, and got on planes to Atlanta, Georgia with nothing but the clothes on their backs. They had long hair, beards, and bad attitudes. They descended by the thousands on Fort Benning, Georgia, and they were not happy about it at all.

In this entertaining, true story, the author relates his own experiences as one of the twenty-thousand IRR recalls who were ordered back to active duty in support of Operation Desert Storm. In a story reminiscent of "The Dirty Dozen" times ten thousand, the author takes you through the entire experience from beginning to end. He carries you along for the ride and explains exactly what it was like to be a recall. With the many IRR recalls over the last ten years of warfare, this first hand account could shed some light on how the current era of recalls began. (29,000 words +/-)
Available ebook formats: epub mobi pdf rtf lrf pdb txt html
First 20% Sample: epub mobi (Kindle) lrf more Online Reader
pdb
Price: $2.99 USD
Buy Add to Library Give as a Gift
How gifting works
Create Widget
Tags: military memoir army gulf war germany infantry fort benning 1990s desert storm
About Doug DePew

The author served just over four years as an active duty infantryman and five years in the USNR. He later earned a BSEd in history and taught public school, was a correctional officer, and taught juvenile delinquents. Today, he is a teacher in a federal prison and lives in the country with his wonderful wife.

Reviews of Recall! Return of the IRR by Doug DePew

This book took me back in time. During Operation Desert Shield/Storm, I was the deputy public affairs officer for a military medical center. During those conflicts, author Doug DePew was recalled to active duty as potential backfill for casualties (some of whom came through the medical center where I worked).

DePew outlines his plans to become a recording engineer -- plans he was well on his way to accomplishing -- that were interrupted by his recall. He then shows his readers exactly what it's like to be brought back on active duty during a confusing time (no orders beyond what got the soldiers back on-base, no schedules ... but plenty of time for physical training).

DePew does a great job of explaining both the psychological and physiological effects of recall, and brings readers right into the barracks with him. His fellow servicemen become like buddies for us as we get to know their stories and see their hopes and fears.

Well-done and highly recommended for those who enjoy military memoirs.

A word or two of caution, this book is for mature audiences especially those of a military mindset.

The book is autobiographical. It sheds light on the author and his background. I never read Doug DePew's first book, SAT & BAF! Memories of a Tower Rat, but I plan on doing so as I think it would give me the reader a better perspective of Mr. DePew's previous military journey.

I thoroughly enjoyed Recall! Return of the IRR. I could plainly visualize the events as they were unfolding. I'm former U.S. Air Force so it wasn't difficult to do. In addition, I was a dependent spouse to an U.S. Army Reservists who participated in Operation Desert Storm. So the book took on a more personal feel as it progressed.

The book has many humorous parts. I was reminded of the movie 'Stripes' in some parts but you'll have to read the book to understand why.

(reviewed 6 months after purchase)
Darcia Helle reviewed on May 29, 2012

This book is a fascinating glimpse into the life of an ex-military man who is recalled to service when war once again threatens to erupt. We see the total disruption to the life he'd been building. Then we travel with him to his new military base and feel the instant camaraderie between these men who'd been pulled back from their civilian lives.

I've never been in the military. My husband is ex-Army, though we got married after he'd been out for several years. I don't have much background in military jargon, but I didn't find that a problem with this book. DePew clarifies his terminology so that anyone can understand.

This is an interesting read for those with military background, or for anyone who'd like to understand what it's like for these men and women who put their lives on the line for us each and every day.

You have subscribed to alerts for Doug DePew.

You have been added to Doug DePew's favorite list.

You can also sign-up to receive email notifications whenever Doug DePew releases a new book.