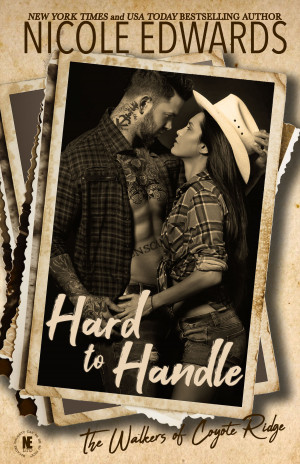 However, Reagan is not going to be easy to catch. She has some stipulations for the bad boy of Embers Ridge, and she has every intention of sticking to them. Or that was her plan. Unfortunately, her good intentions are thwarted when a madman draws her right into the line of fire. When Lynx refuses to let her out of his sight, Reagan soon realizes the sexy country boy might be tattooed from neck to knuckles, but he’s got a heart as big as Texas and resisting him is a whole lot harder than she anticipated.

Nicole is a New York Times and USA Today bestselling author who was born and raised in Texas. Married
with three kids and four dogs, she has plenty of interaction to keep her imagination brewing. Her books
have been featured in USA Today’s Happy Ever After segment as well as Indie Reader’s best seller list.
She has forged her way as an independent author.

Although she has a bachelor’s degree in Human Resources, she prefers to be hiding out in her writing
cave, talking to the fictional characters that have built up in her head over the years.

When she isn’t writing or plotting her next book (sometimes translated to “playing on Facebook”),
Nicole loves to read and spend time with her family and her dogs.

About the Series: The Walkers of Coyote Ridge

Also in Series: The Walkers of Coyote Ridge

You have subscribed to alerts for Nicole Edwards.

You have been added to Nicole Edwards's favorite list.

You can also sign-up to receive email notifications whenever Nicole Edwards releases a new book.