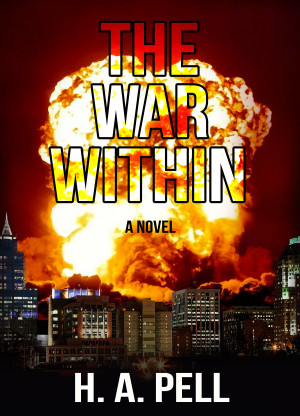 By H. A. Pell
Rated 4.00/5 based on 1 review
FBI Special Agent JACK THOMAS leads a joint terrorism task force hunting a homegrown terror cell led by CAL HENDRICKS, a Viet Nam veteran turned mercenary who has taken up the Taliban cause and plans to kill thousands of Americans. JACK has conflicts in his personal life that could derail his command and affect his career; he must make choices--and stop the terrorists before it's too late More
BY BACKGROUND the men are not so different. North Carolinians who served in the Army and were wounded in combat. Now they are enemies . . .

JACK THOMAS, an Iraq War hero, returns from service and finishes law school. He's now an FBI Special Agent and SWAT team leader. Thomas is assigned as commander of a joint terrorism task force . . . CALVIN HENDRICKS is a Viet Nam veteran turned mercenary. He fought with the mujahideen in Afghanistan against the Russians, married a tribal chief’s daughter, and took up the Taliban cause. Hendricks is the mastermind and leader of a homegrown terror cell. With al Qaeda's help, he is set to wage war and kill thousands of Americans.

JACK LEADS THE HUNT to catch the terrorists but is faced with conflicts in his personal life that could derail his command and affect his career. His younger brother, facing trial for a crime he didn't commit, is counting on Jack to be his lawyer. They saw their father, an Army general, leave their mother in her greatest time of need. How can he abandon his brother now? A woman enters Jack's life but she's an agent assigned under his command . . . and then his love from the past reappears. The attacks begin, and Jack must make choices—and stop the terrorists before it’s too late.

HOWARD ALAN PELL received his B.A. in English and his law degree from the University of Florida. He retired from the Army with the rank of Colonel after a thirty-year career, active duty and reserve. He retired as an attorney with the State of North Carolina after a twenty-five-year career.
In the Judge Advocate General's Corps, he served as a prosecutor; defense appellate attorney; administrative law officer; commissioner (law clerk) for the Army's appellate court; and was the designated legal counsel to a Special Forces Group commander and a Major General commanding a Reserve division. He is a graduate of the Command and General Staff College and his awards include the Legion of Merit.
Mr. Pell was a Special Deputy Attorney General with the North Carolina Department of Justice, representing the State in criminal appellate litigation in State and federal courts, including oral argument before the N.C. Supreme Court. After ten years with the NCDOJ, he went to the N.C. General Assembly and served as a committee counsel for the House Homeland Security, Military, and Veterans Affairs Committee and for both House and Senate Judiciary committees. He also drafted criminal law statutes and provided legal counsel to legislators on criminal justice issues. From 2000 to 2008, he was an Adjunct Professor of Law at the College of Law, University of North Carolina at Chapel Hill.
Mr. Pell has publications in several legal journals and periodicals, including the Florida Bar Journal and the Natural Resources Journal. The War Within is his first novel.

Learn more about H. A. Pell

Reviews of The War Within by H. A. Pell

If you like Jack Reacher you'll love Jack Thomas. Great read as the action continues to the end.

You have subscribed to Smashwords Alerts new release notifications for H. A. Pell.

You have been added to H. A. Pell's favorite list.

You can also sign-up to receive email notifications whenever H. A. Pell releases a new book.