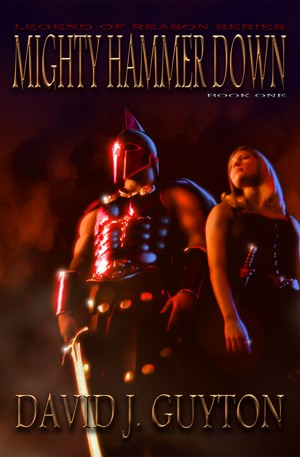 By David J Guyton
Rated 4.00/5 based on 2 reviews
The small flames of the old magic roar to mighty infernos; burning some and lighting the way for others. Great beasts now walk the earth again, and the gods themselves have come down to influence the world of man once more. But the new god of war is not interested in their agenda. He fights with all his might for the freedom of mankind, struggling to bring light to the coming darkness.
Download: epub mobi (Kindle) pdf more Online Reader
rtf lrf pdb txt
Price: Free! USD
Add to Library
Create Widget
Tags: fantasy magic politics libertarian epic epic fantasy greek series rome roman greece sword high fantasy conservative political analogy legend of reason
About David J Guyton

I am an author and artist living in the eastern United States.

My work is fantasy, but it is an allegory for the modern political struggles in the United States.

Also in Series: Legend of Reason

Reviews of Mighty Hammer Down by David J Guyton

I enjoyed some of the discussion of science and philosophy. Guyton has definitely read Descartes and some other philosophers about the limits of knowledge and perception. Unfortunately, the book reads like a continuous right-wing diatribe against multiculturalism, postmodernism and pacifism. If you are an Ayn Rand fan and die-hard anti-communist you will definitely enjoy this book. However, it grated on my nerves, not only because I disagreed with many of the arguments of the protagonists, but also because Guyton paints socialism, multiculturalism and cultural relativism in such cartoonish simplicity; and then attributes them to unmitigated psychopaths who just want power and enjoy inflicting pain on others. Basically the good guys get all the right wing political beliefs and the evil guys get attributed with all the left-wing political beliefs. The story is refighting US politics in an alternative universe with gods, mages and magical swords. I will give it kudos for creativity, but the right wing talking points are repeated ad nauseam in one political speech after another.

(reviewed the day of purchase)
fishgutmartyr reviewed on Jan. 28, 2011
(no rating)
So far, I've read both Mighty Hammer Down, and Blood and Bronze. I love the plot, but unfortunately for this volume, the dialogue (and it's politics) becomes cumbersome and repetitive.

It isn't the political viewpoint so much as how often that viewpoint is expressed throughout the novel. The characters spend far too much time explaining their politics, again and again, to the same people. Towards the end of the novel, it became distracting and frustrating as the action would stop while this occurred.

It is the plot and characters that stand out. All of the characters, both good and ill, are not so one-sided that they feel like they belong in cartoons. The heroes have flaws; the antagonist is one that has reasonable intentions, albeit horrifying methodologies. Even the gods are imperfect and fallible. The plot is intriguing with interactions between gods, mages, and men both mortal and immortal. When these aspects of the novel are allowed to proceed, it is fast-paced and entertaining.

The good news is that the second novel, Blood and Bronze, does allow that to happen on a more consistent basis. Clearly, the author was more comfortable in relaying his opinion via action (and its consequences), so that the second volume moves more freely and with less stumbles. I was very much hooked into it.

(reviewed 54 days after purchase)
Michael Johnson reviewed on May 23, 2010
(no rating)
I only read fantasy from time to time, so it was with some degree of interest when I read David's book discussion on Mobileread. A short time later I had the book on my PC hard drive and thence into my ereader.

Great story with colourful characters. I look forward to more books in the series and highly recommend "Mighty Hammer Down" to fantasy fans and casual readers alike!

You have subscribed to alerts for David J Guyton.

You have been added to David J Guyton's favorite list.

You can also sign-up to receive email notifications whenever David J Guyton releases a new book.