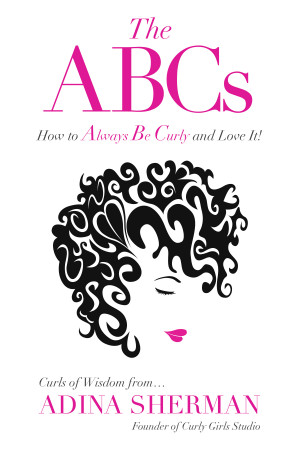 The ABCs~How to Always Be Curly and Love It!: Curls of Wisdom from Adina Sherman

By Adina Sherman
Rated 4.00/5 based on 1 review
The ABCs will teach you how to care for your hair and embrace and love what you were born with, instead of fighting it. This curl-focused book is brimming with curly info and advice. From A to Z, “The ABCs” will take you on a swirling journey with your frizzy, wavy, curly or kinky-curly hair to score that consistent curly style you have always dreamed of! More
Rock your waves and curls!

Whether your hair is wavy, curly, kinky or any curl pattern in between, The ABCs will teach you how to care for your hair and embrace and love what you were born with, instead of fighting it. Curl expert Adina, owner of Curly Girls Studio, has built a reputation for helping clients of all ages and curl patterns in hair despair with her "curl coaching sessions." Clients learn step-by-step routines to bring out the very best in their waves and curls. The ABCs is like having one of Adina’s personalized coaching sessions right in your own home, and will forever change the way you look at your hair, one curl at a time.

Learn:
● How to control frizz
● How to identify your curl pattern and its needs
● Why elasticity is so important for your hair and how to restore it
● Curly rehab and recovery from poor routines, heat damage and chemical services
● Proper washing and conditioning routines to help hydrate and add moisture to your hair
● How to care for multi-curl and super-kinky hair patterns
● About styling products and application methods to get the best curly style
● How to dry, diffuse, add volume and protect your curls at night
● How to get better next-day curls
● DIY curly tips and techniques
● How to color your hair or love your gray, thanks to transitioning and highlighting tips
…and so much more to bring out the curl in you!

As you explore the chapters, you’ll be inspired and your hair routine will be made easy. The ABCs will guide you all the way so you, too, can "Always Be Curly”—and love it!
Available ebook formats: epub
Price: $6.99 USD
Buy Add to Library Give as a Gift
How gifting works
Create Widget
Tags: curly hair hair tips kinky hair hair book hair advice wavy hair curly routines growing hair maintaining curls natural curls
About Adina Sherman

Curly hair expert and texture specialist Adina has never known anything other than being a curly stylist. Entering the hair and beauty industry in 2003, she began her curl expert journey after graduating from cosmetology school, starting her apprenticeship at a downtown Toronto salon in upscale Yorkville. For the most part, this salon specialized in curly hair. Adina was fascinated by the uniqueness and specialized services of a salon dealing with curls—curls of all shapes sizes and textures. She was bitten by the curly stylist bug and headed to the United States to embark on her curly education and certi cations. When Adina stepped into Deva Academy in New York for her rst ever curly course, she had no idea where that step would take her.

Today, Adina has the highest-acclaimed curl-expert certifcations. She is both Ouidad and Curlisto certified, and she also has three Deva qualifications: Advanced, the Art of Texture, and was named Canada’s rst Deva Curl Coach in 2016. A year later, she became an educator for Deva. At the time of this book’s first publication, her salon, Curly Girls Studio, is the only studio in North America offering both Ouidad and Deva techniques to clients. This unique distinction helped Curly Girls make it onto blogTO’s list of “The top 10 salons for curly hair in Toronto” within two years of opening. The boutique studio caters exclusively to curls, providing only naturally curly hair-related service—no relaxers, no perms, no blowouts—and has received accolades for Always Being Curly!

This eBook is packed with valuable information on how to handle your wavy, curly, or kinky hair. Adina Sherman teaches different techniques for you to choose from and experiment with to discover what works best for your unique hair. A must read for anyone who wants to embrace and love their curls!

You have subscribed to Smashwords Alerts new release notifications for Adina Sherman.

You have been added to Adina Sherman's favorite list.

You can also sign-up to receive email notifications whenever Adina Sherman releases a new book.