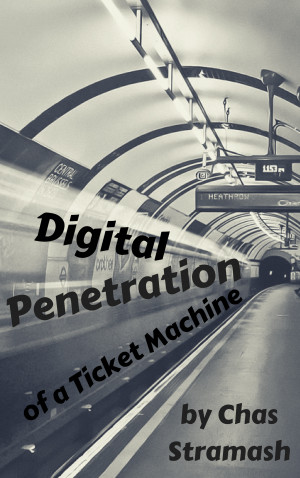 Digital Penetration of a Ticket Machine

By Chas Stramash
A revealing look at London from a Scottish punk poet's eyes. Humorous, satirical and obscene, this is Chas Stramash's seventh chapbook of poetry.

Chas Stramash is a poet.

He has been a poet since 2000. Not because of it, merely a coincidence.

He started off writing poetry about lava lamps, cows, grass and such like. He now writes poems about places, people, events, observations, countries, politics, culture, coffee… in fact, anything is pretty much within scope these days.

Much of his poetry is observational, often humorous, and very often satirical. His work has occasionally been compared with Spike Milligan’s, but he would never entertain the notion himself.

He has written one book of poetry for kids, which he takes with him as he travels around the country and reads to the wee people of Scotland, giving out free bookmarks and stickers as he goes.

He has published two books of poetry for adults. He has yet to read these publicly but is aching to do so.

His books are published by Smashing Press, based in Leith.

You have subscribed to alerts for Chas Stramash.

You have been added to Chas Stramash's favorite list.

You can also sign-up to receive email notifications whenever Chas Stramash releases a new book.