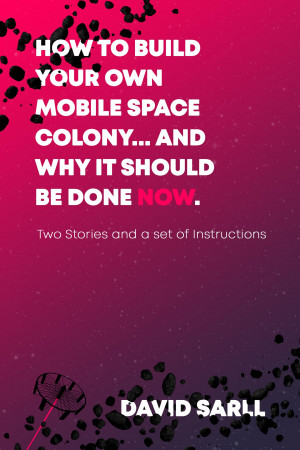 How to build your own mobile space colony and why it should be done now.

Rated 3.00/5 based on 1 reviews
Two stories and a set of instructions on how to build a mobile space colony and how we can use present day technology to reach the stars. More
Two stories that illustrate why the mobile space colonies should be built and how they would be used. These stories lead to a set of instructions on how a colony would be built and how it would be kept ecologically stable over a long time. Considerations of the possible destinations of the colonies are included and surprisingly this solar system is not the limit. The stars can be reached by our grand children.
Download: epub mobi (Kindle) pdf more Online Reader
lrf pdb txt
Price: Free! USD
Add to Library
Create Widget
Tags: space colony plans reasons why

This work is an interesting juxtaposition of a good idea expressed in direct clear language where possible and more technical terms when it was necessary, but a very poor sampling of morality tales and fables.

The two stories mentioned in the advertising blurb are presented before the technical dissertation. The first is a slice of life segment that alternates between different perspectives, and the formatting does not always make it clear when the narrative is shifting from character to character. The second uses a "parallel universe" convention following two different versions of the same man, one who gets involved in creating orbital habitats and one who does not; the former survives and thrives and becomes an icon for humanity, and the latter dies a horrific death after a long, painful, humiliating string of injustices.

I can overlook the formatting inconsistencies in the first story, and to a lesser extent the second. If those were the only flaws in the stories, I would not even ding this thing a single star. However, both stories run afoul of two major narrative shortcomings, each one of which was enough to merit taking off a star. The first shortcoming was an alternating portrayal of the "opposition" in both stories, generally speaking those with lots of money and a vested interest in business as usual. They oppose the space ventures right up until they can get a slice of the pie, up until the people involved are beyond the reach of the 1% up in earth orbit and later interplanetary space. The narrative shifts between portraying these groups as either too strong or too weak, and only in the first story is this portrayed in a realistic fashion, where one character points out that some advantages come with corresponding disadvantages. In the case of both stories, it stretches the bounds of credibility that some company, government, or other private organization wouldn't use a mixture of social engineering and network penetration to make off with all the technical secrets of the "rocket ecologist club" after they did all the hard work of figuring it out, and then start mass producing in their own backyards to catch up, out compete, claim the stars, and - most importantly - taking out the competition by destroying habitats and facilities until they were the only game in town. Instead, the protagonist in that timeline goes off the rails at least once and probably more that once in order to get around economic, political, and social bottlenecks, and gets away with it simply because he is beyond the reach of those whose industries have been disrupted.

Other stories have made this same argument, but the only case I know of in which the setting completely justifies the inability of people on earth to reach those in space is the backstory for Civilization:Beyond Earth in the form of the Inflection Point, a point of resource exhaustion beyond which earth no longer has the energy and material needed to create a space vehicle capable of escaping the gravity well. While the second story alludes to this, it's an afterthought after many habitats had been constructed and launched. The idea of orbital or interplanetary space being a safe zone or instant win condition is not always warranted in the setting, especially when habitats are pretty big targets for direct energy or kinetic weapons.

The second shortcoming is the same phenomenon mentioned in Life After Doomsday by Dr. Bruce Clayton. Dr. Clayton went to several nuclear disarmament meetings during the Cold War and was repulsed by the content of what was shown at these meetings (especially graphic depictions of radiation burns) as well as the pessimistic attitudes of the organizers. He commented that many people came to these meetings because they were already motivated to do something, but left them depressed because it seemed like nothing could be done. Mr. Sarll's stories are doing the exact same thing; while the disarmament groups claimed that humanity had a choice between disarmament and nuclear annihilation, Sarll is presenting readers with a choice between space travel and environmental cataclysm.

The problem with this kind of hard sell is that going too hard makes the "mark" defensive. In the case of the disarmament activists, those that did not go all-in with the group's political pressure on government at the time likely went home and waited for nuclear death; Dr. Clayton wrote Life After Doomsday for those seeking a third option. By going all-in with the Escape-Or-Die, Lady Or The Tiger setup, a lot of readers who might otherwise be interested in looking into the technical aspects of mass produced space habitats will be too put off by the tone of the second story to ever get that far. Much like with the disarmament meetings, a lot of people will read these stories and take away the messages that there isn't enough time to escape ecological catastrophe and stick to business as usual; eat drink and be merry, for in a few decades we will all die.

I also think that the depiction of a world where scarce resources were increasingly and draconianly preserved for the benefits of the elite would have many, MANY more riots, more resistance groups, and least some successes, but that may simply be a cultural convention; the author is British, "stiff upper lip" and "keep calm and carry on" and all that, while I'm American, "don't tread on me" and "from my cold dead hands" and so on. Chalk it up to differences of opinion and cultural expectations.

Had the technical paper on mass producing orbital habitats and all the technology needed to make them - launch vehicles, ion drive engines, and everything in between - been published by itself, I probably would have given it a glowing recommendation. As it stands, I still think people should read this, but I advise folks to skip the fiction and head straight to the nitty-gritty technical details.

You have subscribed to alerts for David Sarll.

You have been added to David Sarll's favorite list.

You can also sign-up to receive email notifications whenever David Sarll releases a new book.