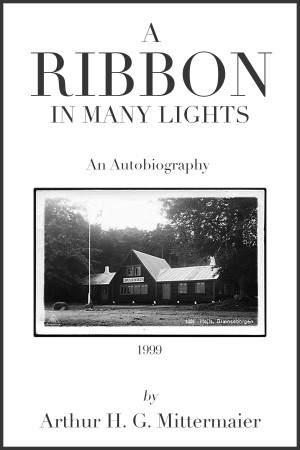 A Ribbon in Many Lights

By Arthur H. G. Mittermaier
Arthur was born in Port Elizabeth, South Africa in 1931, and lived on a remote farm with his parents and brothers. His parents were of German origin. They decided to return to Germany due his father's poor health. But they picked the wrong time: they arrived in July 1939, to Berlin, just before the Second World War began. Abruptly, Arthur was swallowed up by things that were beyond his control. More
Childhood Interrupted

Shortly before wrapping up the section of his autobiography devoted to his happy, dreamy early childhood, Arthur Mittermaier notes that his life seems to have been "made up of a series of phases with very little carried over from one to the next." He continues "When I close my eyes, my past appears like a long ribbon turning and twisting while it passes through different regions, representing the various phases of my life. The phases are of different colour, with one merging into the next, and, even more strikingly, they seem to lie in different intensities of light."

In the year before he died, after suffering strokes that led to deepening dementia, Arthur Mittermaier entered a strange realm where all his past selves were being relived simultaneously. Though physically in a nursing home near Ottawa, Canada, mentally he was elsewhere. One minute, he was on a world tour, visiting foreign countries. Another minute, he was in a Toronto subway, leaving his work at day's end. Yet another minute, he was a child, eating dinner with his parents and brothers in Berlin or Port Elizabeth. These were past recaptured joys. Doors – imagined or real – kept opening and shutting, leading also to past traumas such as extreme poverty, famine, and even shame.

At one point, he told family members that he could see long ribbons of light and shadow on his clothes, in the room around him, connecting other people and things together. He pointed them out in childlike wonder, and his practical engineering mind was cast aside. Was he just intrigued by the dust motes floating in rays of sunlight, only seen at certain angles? Or was he seeing something else?

This odd mixture of a life being relived and refracted points to Arthur's reflective autobiography, "A Ribbon in Many Lights". Completed in 1999, his is mainly a story of a childhood interrupted.

Arthur was born in Port Elizabeth, South Africa in 1931, and lived on a remote farm with his family. We learn of a shy sensitive boy who thrives in the dreamlike sunlight of South Africa. His parents were from Germany. They decided to return there due to his father's poor health. But they picked the wrong time: they arrived in July 1939, to Berlin, just before the Second World War began.

Abruptly, Arthur was swallowed up by things that were beyond his control. Between the ages of eight to eighteen, he was subjected to the horrific darkness of Nazi Germany and its immediate aftermath.

What followed was a waking nightmare. Like other boys and girls his age, it was compulsory for him to be part of the Hitler Youth. In this organization, he was subjected to Nazi indoctrination, ideology which he (and the rest of his family) never subscribed to. Then, because of the war, he was subjected to increasing hardship: displacement, hunger, and then separation from his parents. He was moved from Berlin, and for several years lived with his brother and other boys in school camps at the edge of the Baltic Sea. These school camps were constantly relocated. Then they became refugee camps. Arthur's father died just after the war. After the remaining family was reunited in early 1947, there was poverty, hunger, and further displacement in the ruins of East Berlin. His experiences, while unique to a particular period of mid-20th century history, will resonate with any refugee who has lived through war and its aftermath.

Unlike the raw emotion common in many modern memoirs, this is a story of trauma recounted in a matter-of-fact voice.

And then, as suddenly as it began, in 1950 the nightmare ended. Almost the rest of Arthur's life seems more peaceful, if not still itinerant. We learn of his young adulthood in South Africa, and his university days both there and in the United States. The promise of a good job brought him to Toronto, Canada. This was followed by a rather quiet happy life with his family in Toronto and Etobicoke, Ontario.
Download: epub
Price: Free! USD
Add to Library
Create Widget
Tags: childhood world war 2 autobiography germany south africa refugees

You have subscribed to alerts for Arthur H. G. Mittermaier.

Would you like to favorite Arthur H. G. Mittermaier?

You have been added to Arthur H. G. Mittermaier's favorite list.