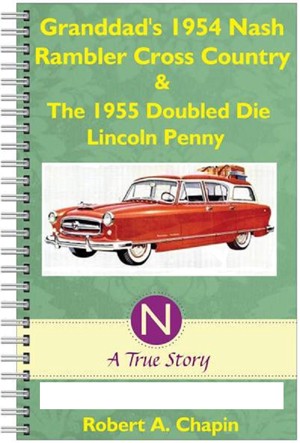 By Robert Chapin
The year was 1955, granddad was 62 years old and I only 9. He was a coin and antique dealer in Western Massachusetts and in this year - 1955 he packed me and a lunch into his 1954 Nash Rambler Cross Country station wagon and travel the back roads of New England in search of the elusive 1955 doubled die penny.

No stranger to writing, acting and singing, in 2006, Bob was chosen to play Charles Ryan in the Kent Brown Summer Love series “ARE WE THERE YET?” A summer theatre production by The Falls Run Players of Fredericksburg, Virginia. This was Bob’s first acting role and his performance earned him the best actor’s award for 2006.

A hidden talent also become apparent when Bob was selected to sing John Travolta’s Summer Nights from the smash hit “Grease”. He is also a member of The First Baptist Church of Bonita Springs, FL where he has been actively involved in the choir for the past 6 years - and his tenor voice has allowed him to produce over a half dozen Christian songs by Randy Travis

Following an impressive career with U.S. Airways, Bob retired in 2000 and has devoted much of his time to producing ORPHANS OF THE MOURNING, his first novel about a soldier in Vietnam who eventually becomes the first Vietnam veteran President of The United States. This book is currently available in the e-book format from Barnes & Noble.

Bob was thrust into the nationwide scene in 1983 with his nationally acclaimed Vietnam poster poem The Wall, a statement about the emotional pain and anger of Vietnam - frrlings and sentiments he was not permitted to express while in uniform, but once discharged, a trip to The Wall evoked his deep personal feelings.

The Wall was displayed in The White House in 1983 and as a result received instant success when President Ronald Reagan personally honored Bob for his contribution to all Vietnam Veterans. To date, tens of thousands of copies have been sold.

Bob has also recently finished his second novel, MURDER IN OGUNQUIT a mystery which takes place in the small New England coastal town of Ogunquit, Maine known as “A Beautiful Place By The Sea”.

In addition to his full length novels, Bob is offering a series of his “folksy” down to earth short stories at no charge for your enjoyment here on Smashwords, and it is the author’s desire that you will consider purchasing his novels after a brief sampling.

Prior to his assignment in Vietnam in 1967, Bob served 16 months in Frankfurt Germany as a civilian with the U.S. Army’s prestigious unit; The 513th Military Intelligence Group as a Top Secret Cryptographer

In Vietnam he was assigned to the First Cavalry Division (Airmobile), 13th Signal Battalion and was awarded The Purple Heart for wounds received in action in addition to The Bronze Star Medal and other awards.

Bob and his wife Maureen reside in Fredericksburg, VA in the summer months and winter in Bonita Bay, Bonita Springs, FL.

You have subscribed to alerts for Robert Chapin.

You have been added to Robert Chapin's favorite list.

You can also sign-up to receive email notifications whenever Robert Chapin releases a new book.