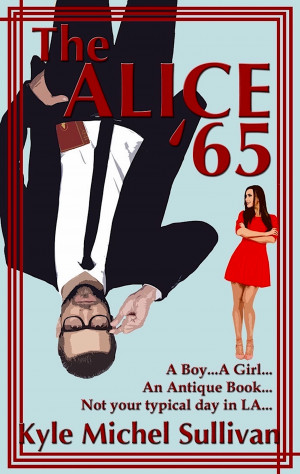 By Kyle Michel Sullivan
The Alice ‘65 is a romantic-comedy about an English lad hiding from the world, an American lass tired of dealing with the world, a rare book worth millions that’s gone missing, and a lonely guard panther who’s taken a shine to the lad...not exactly your typical day in LA. More
Adam Verlain loves his careful, cloistered world of rare books and would never leave it. But when Casey Blanchard, an American superstar, offers her very valuable 1865 copy of "Alice's Adventures in Wonderland" to his university, he is forced to travel from London to Los Angeles to close the deal. He starts off with a disastrous flight, and then is taken aback when Casey refuses to give up the novel unless he escorts her to her latest film premier. Especially since her reasons seem rather...odd.

Subjected to a radical couture makeover, Adam winds up stoned, is mistaken for a British actor, gets dragged to a far to typically untypical Hollywood party, has to dodge an overly affectionate guard panther, and is shocked to learn the book has actually been stolen...and Casey is trying to get it back.

Reviews of The Alice '65 by Kyle Michel Sullivan