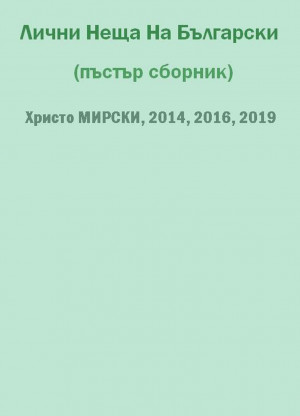 ÷÷÷ To tell you the truth I represent two person, one real and one pseudonymous. The real one was born in the middle of the last century in one country called Bulgaria (which now turned to be European poorest area), in an ancestrally intellectual family. As a result of this I have received two and a half tertiary educations in the exact sciences and in three different countries, and at the moment know three and a half foreign languages. In view of this I have worked in various scientific institutes as research assistant in the end, and /because/ of my higher education I ... have remained unemployed from the beginning of our democracy and for more than a quarter of a century until now I at last am pensioner with — you will never imagine this — a pension of a bit less than ... /three bus tickets daily/ for /all/ expenses! Did you get it?

÷÷÷ So, and by this circumstances it is not surprising that I have become democratic dissident, or intelligent laic, or research unemployed assistant, or (the biggest in the world) /demo-critical/ realist, or the like. Yet because of my scientific education, natural inclination to moderate judgements, as well as my then middle age, I have been (and am) sophisticated enough for to deny nothing /totally/ (how the ordinary people usually do) and have begun to ponder about the pluses of the minuses and vice versa, about the democracy and life in general, finding an interesting for me occupation. In this way I have naturally come to expressing myself in publicistic materials, popular-scientific researches, all kinds of untraditional thoughts, etymological guesses and parallels between (in principle) /all/ languages, and also finding consolation and pleasure in writing of (usually) funny (but also philosophical and other) verses with sound “nursery” rhymes, and this in /three/ languages (Bulgarian, Russian, and English), because otherwise I got often bored. And this was my second “face”, the creative or literary, though chiefly as /non/-fiction writer (although I have some SF stories and poetry, as said). I have published things on several Russian sites, also in three languages, but as far as in 2017 I finished the translation of all my (translatable, i.e. prosaic) things in English I have decided to begin to ... conquer the Western world, so to say. And, come to think about, why not?

÷÷÷ OK, and now some words to my possible readers. Dear guys and girls, if you don’t like the very process of thinking just run as far away from me as possible! I am not for everybody, I am for the chosen. There have to be about 5 percents such people who like to think, not to have only actions and thrillers. But 5 % from 7 billion people amounts to 300 millions people, yeah, where I will be perfectly grad with a pair of /millions/ of readers (instead of my tens to hundred of thousands). And I simply /don’t/ want to get rich, I have nobody to whom to leave my money, so that I will offer everything as cheap as possible. For one thing you can always find me on some foreign site simply writing “chris myrski” (but mark the “i”-s), in your browser, or then writing some of my works, the titles are usually easily accessible (with the exception of “Now, Look Here” which turned to be too common), so that you can read what I have written for you. For another things you can find places where you can also copy my works free in one or another format (or even if not in the right format for you then to use the right mouse button and chose “source” where will be all editing characters and you can, with some efforts, restore the original text). For another thing I will publish even here the first, say 1,000 exemplars free (with some exceptions, like Urrh or something else), so that you can be one of the lucky ones; and there can be works which I will always give free (like, my scientific things in PIR, of for the Arabs, or something else); or I will chose some about ten days in the year and reduce then all the prices (I have to think this over). And for the last thing I will require exceedingly moderate prices, from 1 US$ (even less if this is possible) to about 3 or 4 for a book, also with some little exceptions (like again Urrh). In short, money will give me problems to think and to lose my time, but about (if you look at the beginning) a pair of buss tickets daily I must be able to spend somehow (what is reduced to a pair or bought books daily).

÷÷÷ Ah, and about my pseudonym, Myrski comes from Slavonic ‘mir’ what in Russian means /both/, a peace and the world, so that I am a peaceful writer for the whole world, I am a kind of ... appearance of Christ before the world. And I am, really, writing for the people, or, then, for my pleasure (/per il mio diletto/, in Italian), what means that I usually write things that I alone have wanted to find (like, say, some cynical essays) but have not succeeded and because of this have done it alone. This is a good approach, I thing, try it if you can. And I advise you also to read me for the simple reason that all my ideas and propositions are peaceful, and if the humanity will not accept some similar approach, then the alternative is to kill us mutually, what we have learned to do perfectly, i.e. the difference between my propositions and the common or vulgar approach is only in the social price.

You have subscribed to alerts for Chris Myrski.

You have been added to Chris Myrski's favorite list.

You can also sign-up to receive email notifications whenever Chris Myrski releases a new book.