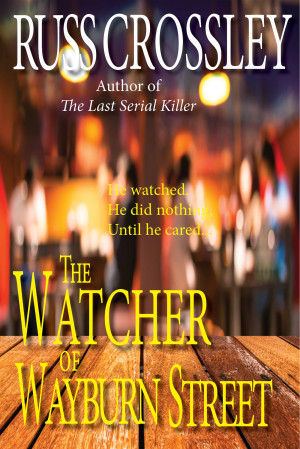 The Watcher of Wayburn Street

By Russ Crossley
Mr. Kenniphaas watches Wayburn Street from his favorite seat in his favorite coffee shop. Each day he watches the world outside the window change. Stores he has known for thrity years close. Crime has come to Wayburn Street. But he does nothing. He just watches.

Until today. Today Mr. Kenniphaas' world and the world of Wayburn Street will intersect. And today both worlds will change.

Russ Crossley writes mystery under the name R.G. Crossley, romance under the name R.G. Hart, and science fiction and fantasy under his own. His two romantic comedies, Bachelorette: Zombie Edition and Antique Virgin were published by Sapphire Blue Publishing, and several short stories have appeared in anthologies from St. Matins Press, at Smashwords, and other e-retail sites.

He resides in Vancouver Canada with his wife, romance writer and painter R.S. Meger, two dogs, and his son, Glenn, a professional actor (something he has dabbled at himself), and far too many books and movies.

Reviews of The Watcher of Wayburn Street by Russ Crossley

You have subscribed to alerts for Russ Crossley.