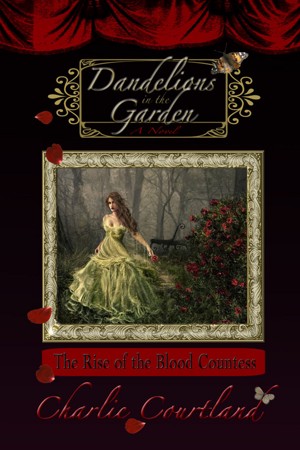 Dandelions In The Garden

Charlie Courtland graduated from the University of Washington with a B.A. in English Literature with an emphasis on creative writing, and a minor in Criminology. She was born in Michigan and currently resides in the Seattle area with her husband and two children.

Reviews of Dandelions In The Garden by Charlie Courtland

Truly a work of art! Wonderful job with this book. Once I started I couldn't make myself stop reading at times. Although I am not going into such a long review as some of the others - I did find this book facinating and very well written!

Amara Borbala was the lady-in-waiting companion to Countess Elizabeth Bathory, the Blood Countess. They were together from the time they were young girls until after Elizabeth's trial. This is her account of what really transpired, as dictated in a manuscript intended for Elizabeth's grandson.

Reading these books, I realized neither is a stand alone story, or even books in a series. They are two halves of the same story: a single story split into two volumes. I can see why, the first is over 400 pages while the second is 300. It is a long story, but quite a fascinating one.

The first volume starts with Amara first joining Elizabeth and covers up to right before Elizabeth's reputation as the Blood Countess begins. The second volume details Elizabeth's exploits and her downfall. The story is more than just Elizabeth's though. Amara takes centre stage and much of the story focuses on her as the narrator. This is especially true in the second volume when Amara begins to distance herself from Elizabeth.

I found both volumes fascinating. The second volume is much darker, as can be expected. The first was much lighter as the girls were much brighter, happier and more adventuresome in their youth. Something I found interesting was the feeling of age in the narration. It was easy to distinguish which sections were written as Amara as an old lady. The feeling of these sections was much older than the narration of her youth. As the narration progressed, the tone definitely matured and aged. I thought this was very well done.

Overall, I was impressed with the story. I would recommend it to fans of historical fiction. With the warning that you need to read both volumes back to back to get the full story.

I will say right upfront that it's obvious Charlie Courtland has done her research. I looked up some items about which I had questions, and found that she was spot-on for the period in those matters.

There were some others, though, where it did not go so well in her telling of Elizabeth Bathory's story. The well-constructed epic novel about the notorious Blood Countess faltered in some tiny details (e.g., describing the use of envelopes during a time when letters were written on parchment or vellum, folded into quarters, addressed and sealed with wax rather than using a separate paper to carry them). I found these and other minutia a little distracting. Some Hungarian names were Anglicized (e.g., Gyorgy Drugeth, an historical personage, became George) while others were not (Sir Draco Lorant ... who was referred to as Sir Lorant several times; knights are Sir Firstname).

Admittedly, my nitpicking is a minor point. Courtland has created an intriguing world of romance, revenge and intrigue. Told through the eyes of Amara, one of Bathory's ladies-in-waiting, "Dandelions in the Garden" is a fascinating look at 16th C. Austro-Hungarian culture. Courtland writes with both compassion and frankness about Bathory and the legends that surround her.

At the end of the book, we find Bathory on her way to Vienna. Embarking on new adventures that are only revealed in [book:The Hidden Will of the Dragon|8292510], the young "Blood Countess" is just starting the period that gave rise to the folk tales about her.

I am given to understand that a new edition of "Dandelions," which corrects some of the editorial issues in this version, is forthcoming.

Overall, I would recommend this book to historical fiction buffs with the caveats that I mentioned firmly in place.

Style:
Charlie Courtland's 'Dandelions in the garden' is presented in such clarity the text sparkles. Closer to documentary than memoir, her character, Amara is given superhuman powers of recall, which this narrative cannot exist without. Yet, the viewpoint is focused only through her eyes; nothing exists that she did not see, hear, or feel. There is no chance to hear another character’s thoughts until they speak them. This is not detachment, as the modern voice might leave one feeling – it is clarity.

In a romantic, Victorian voice, this story would have lost the ability to stand at Amara's shoulder and observe as it does. ‘Dandelions’ is written as a crime novel. It is stark, and gritty during the bloodletting, and the reader expects the flash of crime-scene cameras. How it maintains the obvious feeling in the romances; the shattering of hearts with dejection and rejection - the longings that last so insufferably long (for the characters) - that is a clever skill, in that voice.
The author is cunning, and never only fills space with details, she fills the tale with emotions.

What Charlie Courtland has done, with this two-book tale, is reduce the massive scope of her imagination to the core of what it is: a story that can be rich in texture and place, and yet lay bare what was done. Done to Elizabeth Báthory and Amara, and what was done by them.

The tale has a vicious bite, and the characters remain in place – to watch if you will die.

Content:
Charlie Courtland gives us a story so imaginative, its power cannot be resisted. Grand enough to be divided, thoughtful enough to bring only a taste of the horrors into the first book, as a reader, one can believe every word as truth. One can imagine just how the two main characters felt, living the life they were forced to live, and understand where the murderous tendencies were seeded into Elizabeth Báthory’s heart.

Told to us in the simple voice of Lady Amara, who recalls every moment in stunning detail, we hear longing for something peaceful and lovely, which has no string of obligation. We feel just as trapped as she; a sly trick of the narrative voice, nothing exists in the story that Amara did not see, hear or feel. But, that was how the two young girls lived, even into adulthood – they did not exist, unless someone with power chose to acknowledge them. That life, of only shadow and servitude, twisted Elizabeth. How could Amara escape such madness?…it may be true she did not.

The period and the setting, late sixteenth century Hungary and Transylvania, wears all the pomp of royalty, the privilege of station and rank, the power of noble blood. But, in every moment of these two joined lives, there is corruption within the beauty. The beauty is only a façade, and they never will be blessed to enjoy it; it is filled with weeds and decay – the dandelions in the garden.

Charlie Courtland has opened her imagination for us, and provided something stunning. One must wonder; did she live it in a previous life? Which was she then…Elizabeth, or Amara?

Elizabeth Bathory, otherwise known in our history books as The Blood Countess, was, by most accounts, a savage killer who took pleasure in torturing her victims. Courland's book takes a look at the real Elizabeth's early life through the fictional eyes of young Amara, her closest friend and lady in waiting.

Dandelions in the Garden starts out with Amara as an old woman. She decides to write what we would consider a memoir or biography and her writing then becomes the story. I am not normally a fan of books that shift back and forth in time but Courtland handled this well. She does a great job bringing her characters to life and showing what the world was like for women during the 16th century. The girls' behavior sometimes makes us laugh and other times makes us gasp. But, through it all, we can understand how circumstances could shape these young women.

This is the first book in the series and leaves Elizabeth and Amara as young married women. Book two - The Hidden Will of the Dragon - takes them through adulthood.

I read Bram Stoker's Dracula as a teenager while visiting an aunt and uncle who lived in an old cottage in a hamlet in the east of England, complete with thatched roof, crooked floors and creaky stairs. Probably an unwise choice of bedtime reading, I succeeded in scaring myself half witless, and came to suspect the wizened old man living next door was not all that he seemed.

I read the eBook version of Dandelions in the Garden by Charlie Courtland on my smartphone, which perhaps goes to show that we do sometimes live and learn. But although it features Elizabeth Bathory, a descendant of Vlad Tepes, who was the inspiration for Stoker's Dracula, it is not a horror story in the traditional Dracula mould.

It's not without horrific scenes though, several characters meeting a grizzly end, and some aspects of the story might be considered quite shocking, in that behaviours we modern humans consider unacceptable are presented as quite normal. But, of course, attitudes in Europe four hundred years ago were somewhat different.

If I had to write a one-sentence review it would be this:

A cracking good tale full of all the ingredients which make a good story -- adversity, conflict, emotional highs and lows, love, sex, violence and a few surprises.

Historical purists might find the use of modern language off putting, but I found it made the characters into people I could believe were real. But more than that, I was able to put myself in their shoes. I'm not entirely sure that all of the views expressed by the narrator are consistent with the period, but I was able to overlook that because it brought an extra perspective to the tale. However, a few typographical and suchlike errors seem to have slipped through the editorial net, which bounced me out of the flow when I came upon them. I'd have been thinking about awarding 5 stars if it wasn't for that.

I don't know if all, or any, of the events depicted actually happened, but if you like a good story, well put together, then that will matter as little to you as it did to me.

There is a deeper level to it, in that it is an illustration of the truth of Lord Acton's words "Power tends to corrupt, and absolute power corrupts absolutely." But it's the characters, as portrayed through the eyes, and pen, of Amara Borbala, Countess Elizabeth's lady-in-waiting, that make this story come alive.

I still haven't figured out the relevance of the title of this one, but I'm certainly looking forward to reading the second book in the series.

You have subscribed to alerts for Charlie Courtland.

You have been added to Charlie Courtland's favorite list.

You can also sign-up to receive email notifications whenever Charlie Courtland releases a new book.