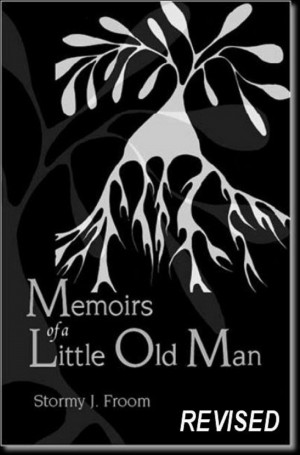 Memoirs of a Little Old Man

By Stormy Froom
"This book gives hope to those in the deepest depths of despair.
This book of poetry and art can be a quick read or one to ponder over many times.
I recommend this book to anyone interested in personal healing and growth or
to those who work with individuals that are beginning a pathway of healing."
~~anonymous~~
Download: epub mobi (Kindle) pdf more Online Reader
rtf lrf pdb
Price: Free! USD
Add to Library
Create Widget
Tags: personal growth spiritual growth poetry spiritual art healing spiritual inspirational spiritual poetry
About Stormy Froom

2019 Stormy Froom is a Practitioner of Spiritual Healing but not taking any clients. Late twenties in 2002 took a Basic Pranic Healing Certificate in Vancouver, B.C. and not knowing at the time started his venture. Attempted to take clients but frustrated with a feeling that he didn't have all the techniques and experience he needed he stopped. Involved himself with the Serve the Unicorn Fellowship Inc. practices for a couple of years before the passing of Master Miguel Nator - Founder. Healing Certificates with DNA Possibilities 2003-2004: E.I.P. - Eliminating Interference Patterns of DNA Certificate and Rapid Healing - The Mathematical Reconstruction of DNA Certificate in Vancouver, B.C.. Founder Margaret Ruby. Involved with the Kundalini movement and became Tummo activated by Mystress Angelique Serpent. Initiations into many paths for example: 2005 Tera-Mai Egyptian Cartouche Healing. Became the author of books for hope and healing named: Memoirs Of A Little Old Man in 2007, Survival Healing 101 in 2012, and in 2013 Limbo Of A Little Old Man. To live the path and walk the path.

You have subscribed to alerts for Stormy Froom.

You have been added to Stormy Froom's favorite list.

You can also sign-up to receive email notifications whenever Stormy Froom releases a new book.