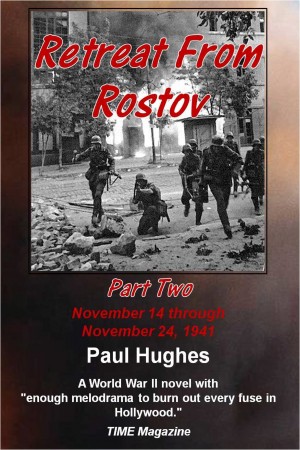 By Paul Hughes
Here is how a feature in TIME magazine described Retreat From Rostov: The novel was a Russian rodeo of heroes, heroines, Nazi villains, Don Cossacks, foreign correspondents, soldiers, civilians, enough snow to bury an army, enough melodrama to burn out every fuse in Hollywood. This epic World War II novel was inspired by the first battle in which Hitler's armies suffered defeat. More
This book is Part Two of Three Parts that collectively tell the story of thirty-four days in late 1941 which saw armies of Adolf Hitler defeated for the first time, at Rostov in the North Caucasus.

It is an amazing array of multi-faceted word pictures of male and female characters that the reader will not soon forget. It was soap opera on a grand scale before soaps took over day-time television.

You have subscribed to alerts for Paul Hughes.