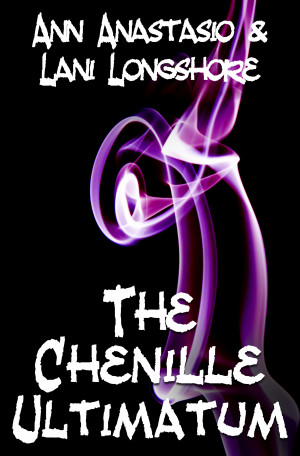 By Lani Longshore
Susan hoped sending her mother as an ambassador to the planet Schtatik would stop the aliens from making a nuisance of themselves on Earth. Instead, it starts a civil war. Will Susan be able to stop the alien clans from squabbling long enough to introduce them to Earth, and save her mother? More
Susan thought she was safe when the space aliens left Earth, but her mother Edna went with them and managed to get herself chosen as queen. Now Susan has to travel across the galaxy to stop a civil war. The ghost of Susan's great-grandmother is only one of the unexpected allies who join the battle, both on the alien planet and back on Earth. On the journey, Susan learns how strong she really is, and why she should carry an embroidery project wherever she goes.

Ann Anastasio and Lani Longshore are Broken Dishes Repertory Theatre. They sing, dance and write about quilts, quilters, and science fiction with fabric.

You have subscribed to alerts for Lani Longshore.

You have been added to Lani Longshore's favorite list.

You can also sign-up to receive email notifications whenever Lani Longshore releases a new book.