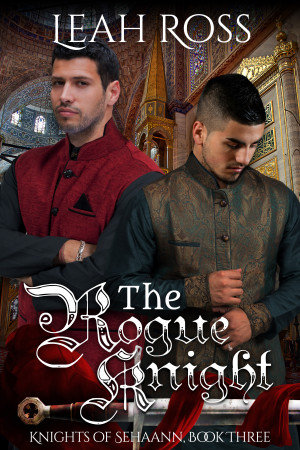 Sanjay isn’t perfect. He’s a fighter, a strategist, deadly with a blade and master of his magic. He’s a knight, not a saint. Despite his dishonorable past, he’d rather be remembered for his morality and not for his many transgressions. Yet, with his conscience at war with his responsibility, it’s maddeningly difficult to decide where his loyalty should lie. He’ll lose, no matter what he does. Mired in endless uncertainty, only one truth remains—ending up on the wrong side will cost him everything.

Only barely considered part of the Farashtaran aristocracy, Josha is used to being overshadowed by the influence and privilege of his peers. But as a knight and elite fighter of Sehaann, he wields his sword in protection of the realm, rejecting the voracious, divisive ambition that he despises. Back home for the first time in years, though, Josha comes face-to-face with the demons of his past. Someone is pulling him away from Sanjay and Josha must choose between his best friend and the fate of his country.

Sanjay and Josha have never known life without the other in it. But much has changed since the simplicity of their youth, and the pressure of political conspiracy just might tear them apart forever. If they can thwart the burgeoning treachery without succumbing to it in the process, then perhaps they can begin to right the grievous injustice threatening to topple the Sehaannian throne. And if the rampant betrayal proves too difficult to fight, then they may be forced to abandon honor just to survive.

Price: $4.99
$1.25 USD
Buy with coupon Use the code SSW75 at checkout for 75% off during our site-wide promotion!
(Offer good through July 31, 2020 )
Have a better coupon?
Add to cart, then apply your coupon
Add to Library Give as a Gift
How gifting works
Create Widget
Tags: magic fantasy romance gay romance alternate universe knight romance romance mm
About Leah Ross

About the Series: Knights of Sehaann

Sehaann is a land of chivalry and honor, of nobility and royalty. It’s also rife with political machinations and status achieved at any cost. To live among the Enuldesh is to manipulate your way to the top or get kicked into the gutter. There is precious little middle ground.

As one of the most powerful magical races of Syndraya, the Enuldesh command a level of respect not enjoyed by many other beings. With power comes corruption, though, and stories of Enuldesh coups are legendary. Peace is a tenuous prospect, at best, and the residents of Sehaann are always preparing for the next political upheaval.

Only one has the ability to bring lasting peace. The one who was never supposed to take the throne. The outsider among his own people. The reluctant heir to his father’s distinguished legacy. He must lead his warriors and his people through the maze of treachery and deceit or civil war will destroy them all. Even among the prestigious Knights of Sehaann, though, there are forces working against the crown.

Also in Series: Knights of Sehaann