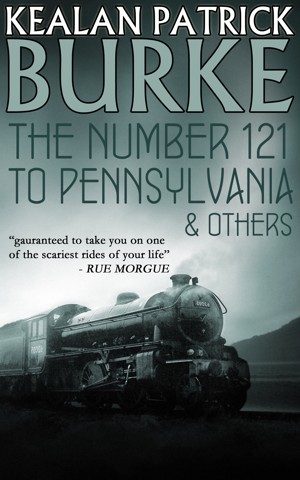 The Number 121 to Pennsylvania & Others

Rated 5.00/5 based on 1 reviews
Available for the first time in digital format, the acclaimed collection THE NUMBER 121 TO PENNSYLVANIA & OTHERS, almost 100,000 words of short fiction by the Bram Stoker Award-winning author of THE TURTLE BOY.

"a collection guaranteed to take you on one of the scariest rides of your life" - RUE MORGUE More
Available for the first time in digital format, the acclaimed collection THE NUMBER 121 TO PENNSYLVANIA & OTHERS, almost 100,000 words of short fiction by the Bram Stoker Award-winning author of THE TURTLE BOY.

The lonesome sound of a long forgotten train draws an old man to memories of a horrific past... A journalist makes the mistake of visiting a website where real-life executions are the order of the day... At the foot of an old tree, an insidious evil awaits two boys digging for treasure... A browbeaten salesman finds hope and a possible escape from the banality of his world when he returns home to find a fairytale beanstalk sprouting from his garden... A man resists the social pressure to quit smoking and puts himself at an unimaginable risk... A high school student accepts a dare to ask out the ugliest girl in school and enters a world of pain and violence... A comedian finds himself faced with a most peculiar and deadly audience...The pariah of a village accepts an offer of peace at his mother's funeral, but the olive branch may have hidden thorns...A bunch of barflies doomed to murder sinners get together for one last drink in a dying town...

These are just some of the passengers, headed for a ride through the dark uncharted regions of the heart and mind...on The Number 121 to Pennsylvania.

Includes such reader favorites as "Empathy", "Mr. Goodnight", "Underneath", "The Grief Frequency" and "Peekers".

"In 14 dark fantasies collected here, Burke creates characters whose angst opens them up to uncanny incidents and ghostly encounters that seem an extension of their own spiritual malaise... Burke shows skill at imagining expressive supernatural experiences appropriate for his well-developed characters and their agitated emotions." - PUBLISHERS WEEKLY

"Each tale grabs you within the first few sentences and never lets go, resulting in a collection guaranteed to take you on one of the scariest rides of your life." - RUE MORGUE

Introduction
The Grief Frequency
The Number 121 to Pennsylvania
Mr. Goodnight
Empathy
Peekers
High on the Vine
Tonight the Moon is Ours
Prohibited
Underneath
Snowmen
Will You Tell Them I Died Quietly?
The Last Laugh
Cobwebs
Saturday Night at Eddie's
Story Notes

Born and raised in a small harbor town in the south of Ireland, Kealan Patrick Burke knew from a very early age that he was going to be a horror writer. The combination of an ancient locale, a horror-loving mother, and a family full of storytellers, made it inevitable that he would end up telling stories for a living. Since those formative years, he has written five novels, over a hundred short stories, six collections, and edited four acclaimed anthologies. In 2004, he was honored with the Bram Stoker Award for his novella The Turtle Boy.

Kealan has worked as a waiter, a drama teacher, a mapmaker, a security guard, an assembly-line worker at Apple Computers, a salesman (for a day), a bartender, landscape gardener, vocalist in a grunge band, curriculum content editor, fiction editor at Gothic.net, and, most recently, a fraud investigator.

When not writing, Kealan designs book covers through his company Elderlemon Design.

A movie based on his short story "Peekers" is currently in development as a major motion picture.

Another wonderful collection from one of the most gifted authors out there in any genre.
Briefly,I will talk about just the first story.I was in tears over the loss of the main protagonists wife.I have lost a spouse and this author was able to touch on just those things that I was thinking and feeling when it happened to me.
The other stories in the collection were as good as the first.This author has a way with words that is almost lyrical and he is able to get to the emotions under the emotions so well.
I stayed up late last night to finish this stellar collection and it was time very well spent.

You have subscribed to alerts for Kealan Patrick Burke.

You have been added to Kealan Patrick Burke's favorite list.

You can also sign-up to receive email notifications whenever Kealan Patrick Burke releases a new book.