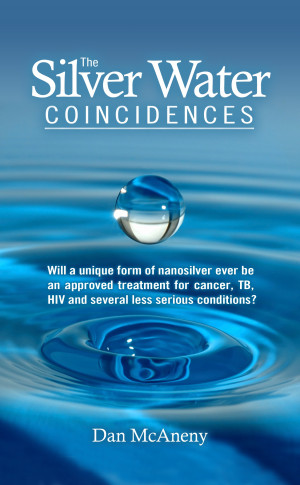 The Silver Water Coincidences: Will a Unique Form of Nanosilver Ever Be an Approved Treatment for Cancer, TB, HIV and Several Less Serious Conditions?

By Dan McAneny
At 85, Harry Watson was diagnosed with cancer and given a month to live. He discovered a high-quality nanosilver drink and found himself in good health six weeks later. He had to share, so he obtained distribution rights to make Precious Waters™ nanosilver affordably available. The FDA forbids making claims that it treats or cures disease, but this book was written to help Harry spread the word. More
Imagine you’re 85, riddled with stomach cancer, with only a month to live. Remarkably, you start drinking something that looks and tastes like water, and six weeks later you are in good health. Friends with sick relatives ask you for the water. You give away your last bottle. When you search the internet for more, you find people asking $8000 a bottle! What do you do? The average person might just forget about it and continue living a full life. But Harry Watson is no average person.

At age 85, Harry decided he had to share his discovery of “silver water” with the world. After months of effort, he managed to get the distribution rights to this unique, high-quality nanosilver, and he made it available at prices anyone could afford.

The good news? Scores of people have shared with him how their conditions improved while taking Precious Waters™ nanosilver. The bad news? FDA regulations forbid making any claims that it treats or cures any disease; however, it is allowed to be sold as a dietary supplement. Harry, now age 92, continues to spread the word, eager to help as many people as possible.

This book was written to help Harry spread the word. If you know anyone with cancer, leukemia, HIV, TB or even a less serious condition, you might suggest they read about these “coincidences” where people got better from a variety of diseases at the same time they happened to be taking Precious Waters™. No medical claims are made, but the coincidences keep piling up.

This book is a short, fast read, but it could make an amazing impact on the life of anyone who wants to see if they can enjoy the same happy coincidences others have experienced. Here are just a few:

Apart from his family, Dan McAneny has three main interests. One is working with people on disability who want to start a business or get a job. He’s been doing that for over 30 years, creating business plans and guiding job searches. He has written two books in that field.

Another interest of Dan's for the past 45 years has been researching and studying our experience as spirits without physical bodies before birth and after "death," and its many positive implications for those currently living. His primary credential for writing on that subject is that he is very much the average person, not a scholar and not specially gifted in any way. All anyone has to do is look at the very simple and obvious evidence that "dead people" have been communicating beneficial information to those living in western civilizations for well over a century.

He has written six books on this topic, and he published a revised, shorter version of his first book in 2015 with a new title, "You are Bigger Than All Your Deaths." His recent books list Dan McAneny as the author, while the earlier books list Daniel Thomas McAneny as author. His books include: The 2075 Movement; We Are All Tourists; The Only 5 Things You Need to Know; Christ Was Not Crucified, Thank God; and, It's SPIRIT, Stupid, NOT Matter.

His third major interest is in medical developments that might help people get off disability. This last topic, plus his own experience as a 5x cancer survivor, stimulated his interest in how his friend Harry Watson, a World War II fighter pilot, recovered from cancer twice in his 80s while taking nanosilver, and resulted in his book titled "The Silver Water Coincidences."

Dan and his wife have lived in New Jersey, Virginia and North Carolina. They currently live in the Sarasota FL area and have five children living in various parts of the U.S., with 11 grandchildren.

You have subscribed to alerts for Dan McAneny.

You have been added to Dan McAneny's favorite list.

You can also sign-up to receive email notifications whenever Dan McAneny releases a new book.