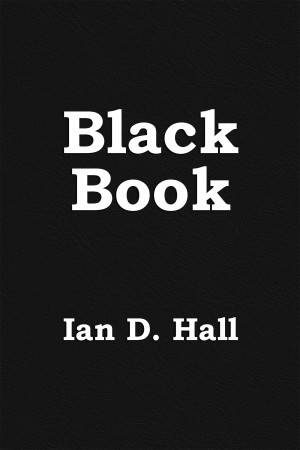 Liverpool has always nurtured distinctive voices in its poetry, music, and art. In this collection, Ian Hall - poet, performer, reviewer of film, theatre, and music, founder of 'Liverpool Sound and Vision', graduate of English, and all-round local legend - sounds his voice with distinction, joining it to the city's resounding chorus of talents. Black Book moves us from the Armitage-like wit of 'One Day in Crewe' to the dark protest of 'Who's to Blame'; from Crosby beach in 'The Seagull versus the Iron Men' to the American, Bourbon-scented whirl of 'Kerouac Dreams'. The versatility and range of these poems will take you and shake you, shifting from sonnet to free verse and back again, and from the poet's profound love for a Morris Minor to the deep myths of Eve and the Devil, Echo and Narcissus.

To borrow a telling line, each poem is a 'sculpture of passionate sentiment : delicate yet enduring, often poignant yet also ruggedly tough.'

Read on. Enjoy.
May the music of this poetry fill you, every note.
Dr Michael Davies, University of Liverpool

Ian puts all the write words in the right places to produce profound poems.
John Gorman

Having been found on a 'Co-op' shelf in Stirchley, Birmingham by a Cornish woman and a man of dubious footballing taste, Ian grew up in neighbouring Selly Park and Bicester in Oxfordshire. After travelling far and wide, he now considers Liverpool to be his home.

Ian was educated at Moor Green School, Bicester Senior School, and the University of Liverpool, where he gained a 2:1 (BA Hons) in English Literature.

He now reviews and publishes daily on the music, theatre and culture within Merseyside.

You have subscribed to alerts for Ian D. Hall.

You have been added to Ian D. Hall's favorite list.

You can also sign-up to receive email notifications whenever Ian D. Hall releases a new book.